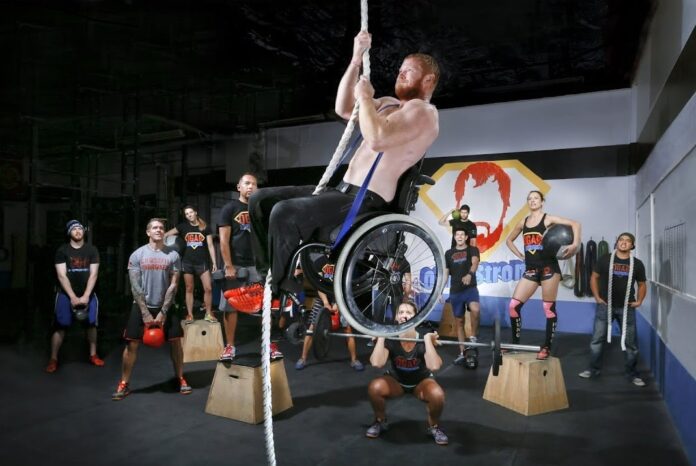 There are fitness trainers to fit and motivate every type, from the firm drill sergeant to the nurturing cheerleader and every style in between. These exercise experts can help you define your goals, customize wellness plans, keep you accountable and, when necessary, adapt execution to safely and efficiently achieve results.

Adaptive athletes are revolutionizing the fitness industry, from both the trainer and trainee perspective. Gym rats no longer look the same as more and more athletes of all abilities hit the weights and explore adaptive sports. Health clubs are improving accessibility with inclusive design and equipment. Coaches are seeking specialty certifications to better support their adaptive clientele; not to mention a growing number of these coaches actually have first-hand experience as adaptive athletes themselves. AmeriDisability connected with three toughies breaking down bodybuilding barriers to fiercely flex the limits of fitness.

Kevin Ogar says CrossFit helped him turn his life around physically and mentally. Twice actually ─ first when he fell in love with the sport in 2007 and again after he was paralyzed from the waist down in 2014. “The community-based fitness that CrossFit provides can pull people out of a funk and change people’s lives completely,” Kevin affirms to AmeriDisability.

Created by Greg Glassman in 2000, CrossFit is a high-intensity program incorporating components of several sports to combine weight-lifting, cardio and other elements. It is now a wildly popular fitness sensation with more than 13,000 affiliated gyms (known as “boxes”) promoting “workouts of the day (WOD).”

Kevin always had a knack for athletics, including an impressive collegiate rugby career. So it was no surprise that he was dominating his way up the professional ranks of powerlifting and CrossFit. Then, a “freak lifting accident” involving a missed snatch, a move he’d conquered many times before, left the then 28-year-old competitor with a spinal cord injury. Kevin survived two complex surgeries, followed by a rehabilitative stay. Still, the life-altering event never swayed his dedication to the sport. In fact, he believes the forte he gained through CrossFit gave him a leg up on recovery.

“After I was paralyzed, I knew that CrossFit was going to bring me through the woods and help me be an independent, functional human being,” shares the now 33-year-old coach. But’s it’s done much more than that. Within a year of his injury, Kevin returned to the competitive circuit as an adaptive athlete and also opened his own gym, CrossFit WatchTower, in Englewood, Colorado. He became a Level 3 Certified CrossFit Trainer and, as spotlighted in the documentary OGAR: Will of Steel (available on Amazon Prime Video), Kevin became the first wheelchair-using member of the CrossFit Level 1 Seminar Staff. To achieve this status, he passed a grueling learning process to be deemed one of the sport’s top ‘trainers for trainers.’ And because he became a certified adaptive coach as well, Kevin now empowers both able-bodied and adaptive athletes. He says he feels fortunate that coaching (especially adaptive athletes) gives him “the ability to see someone’s physical fitness change and also their demeanor, personality and self-confidence. I wouldn’t trade this job for the world!”

Kevin proudly proclaims that the clientele at WatchTower is more diverse than any other CrossFit gym. “I know of other gyms run by adaptive coaches, but we have anyone and everyone working out together,” he says, including wide ranges of age (early 20s to almost 70) and disabilities. “We have people who have lost a limb, loss of function, traumatic brain injury, cerebral palsy, multiple sclerosis — you name it and we work with it,” he says, adding, “No one is seen as part of the able-bodied community or adaptive community; we’re all just WatchTower members and athletes.” The gym also operates a rehab program.

Now as a busy business owner and head coach, Kevin has scaled back from competing but still loves to workout, usually up to five days a week. That doesn’t mean his joy of fitness hasn’t been tested. After being paralyzed, he had to learn how to train himself and coach others in a completely new way. “Before my accident, I was very much a visual coach. Meaning I knew how to move well and knew how to show people how to move well. After my accident, I really couldn’t ‘show’ anymore,” he acknowledges. “So, I had to really dig into and crack down on verbal cues a lot harder than before. It was challenging to put into words what I used to just demonstrate with motion.” Kevin studied with various mentors to perfect his newfound style which, he admits, is somewhat blunt yet effective.

This dog-loving jokester understands why many are seriously intimidated by CrossFit, especially those with disabilities. It’s because, in part, televised competitions highlight the extreme. “What you see in the CrossFit Games is not the basis… it’s the far end. What most people do in a CrossFit gym is for health and wellness,” he explains, just like any other exercise regime.

Somehow Kevin finds time to serve as the Vice President of The Reveille Project, a nonprofit he co-founded to grant wellness-focused guidance to veterans with mood disorders and physical disabilities working to adapt socially, emotionally, physically and spiritually back into civilian life. The program has sponsored more than 50 veterans and counting. Ironically, Kevin had no idea that he would be able to personally relate to injuries sustained by wounded warriors when the Reveille Project concept first arose (just prior to his injury). He also serves as a board member for the Adaptive Training Academy. For daily WODs designed for wheelchair users, check out WheelWOD.com.

Based in Phoenix, Arizona, Ability360 is one of the nation’s largest Centers for Independent Living. It’s a nonprofit organization run by people with disabilities for people with disabilities. Housed in a stunning 45,000-square foot, $13 million facility, Ability360’s inclusive Sports & Fitness Center boasts competitive sport teams, indoor courts, multiple pools, a climbing wall, an indoor jogging track and a plethora of gym equipment.

“Ability360 is a great organization because it allows differing individuals the opportunities to see where they can go,” declares 47-year-old Toni Grimes, a personal trainer empowering adaptive athletes. This gig is actually her second career. After nearly two decades of military service, including tours of duty in the Republic of Korea and Afghanistan, Toni was medically retired as a Major from the U.S. Army with lupus and PTSD. She describes the months following her release as “really bad because the lupus affected my brain and spinal cord. I had to go through a lot of therapies when I got out.”

According to the Mayo Clinic, lupus is a systemic autoimmune disease that occurs when the body’s immune system attacks its own tissues and organs. Inflammation caused by lupus can affect many different body systems, including one’s joints, skin, kidneys, blood cells, brain, heart and lungs.

In 2011, along with one of her survivor support groups, Toni took a tour of the then-newly opened Ability360. “I fell in love with the fitness floor. I just thought, ‘I have to be here!’” she recalls. Toni started as a volunteer and, later, joined the personal training staff.  While her daily struggle with discomfort is ever-present, she knows her own disabilities positively impact her work. “Because of my own pain, I understand how difficult it can be to get up and push yourself when you are not feeling well or question your capability,” she explains. Toni attests that the state of her mental and physical health is best when she maintains an exercise regime ─ which is something she shares with her clients. Her clientele is quite diverse; for example, she’s coached a wounded warrior working to regain (and surpass) his bench press goals, a blind senior who had never stepped foot in a gym to lift weights before and an elite adaptive athlete training for and landing a spot on a national team.

Appropriately descriptive, Toni says her coaching style is adaptive. Some clients need a cheerleader and others need a drill sergeant. She has the refined skills to quickly grasp a situation and provide proper direction. Recently inducted into the Arizona Veterans Hall of Fame Society, Toni works tirelessly as a disability advocate in both her professional and personal life.

Zumba integrates upbeat aerobic dancing and music and, so, 36-year-old Carina A. Ortiz Toro of Lajas, Puerto Rico says she knew it was the best exercise for her. “It has all the things that I love,” she explains. She reluctantly started taking Zumba classes in 2013 and found that she typically was the only participant in the room working up a sweat from a seated (wheelchair) position.

Carina has spina bifida, a condition that affects the spine and is usually apparent at birth, according to the Centers for Disease Control. It is a type of neural tube defect that occurs when the neural tube does not close all the way.

However, fast forward three years… Carina parlayed her passion into a profession. “As of today, I’m the first (and only) wheelchair-using Zumba instructor in Puerto Rico and the Caribbean,” Carina tells AmeriDisability. Although she hopes other fitness enthusiasts with disabilities will join her for a Zumba class or even on the teaching platform. “Figure out your difficulties and skills. Don’t let your difficulties top your skills! Try everything… if it doesn’t work the way you expect it, try a different way until you find what fits for you,” she urges. For Carina, who leads both able-bodied and disabled participants, that includes a combination of verbal cues and physical demonstrations.

She admits that she prefers to instruct individuals with disabilities because offering inspiration to others is a personal motivator. “Zumba is a great way for people in wheelchairs to get agile, have balance in their torso and strengthen the upper body,” she explains, all within an energetic and enjoyable environment. To locate one of her classes, visit Carina’s Facebook page.

For information about becoming a personal trainer, visit:

If you have a disability and are seeking a qualified trainer, consider these questions: