A person is not defined by what they look like or how they speak but by their unique thoughts, perspectives, and vision unseen by others.

A person is not defined by what they look like or how they speak but by their unique thoughts, perspectives, and vision unseen by others. Jason DaSilva has used his imagination to create visually and emotionally appealing films that have won multiple awards. He has also used his experience to help others by creating an application used allover the world.

Jason DaSilva is filmmaker who studied at the Emily Carr University of Art and Design and graduated at 21 with a film, Olivia’s Puzzle, that was welcomed to the Sundance Festival in 2003. Being one of the youngest at the time who was accepted into Sundance, he recalls how surreal it was to be there and how it led him to work with major networks such as HBO and PBS. Between the ages of 21 and 25, he produced four films - an impressive number in the film industry.

At the age of 25, DaSilva began having difficulties with his vision and mobility. In 2005, he was diagnosed with primary progressive multiple sclerosis (PPMS). Clearly, this was a huge shock but rather than giving up his passion for filmmaking he decided to turn the camera around to share his own story through the transitions of having PPMS. In 2013, he released the Emmy Award-winning documentary When I Walk, http://wheniwalk.com/. This film recounts a seven-year journey from when his symptoms started setting in, learning to adapt, and trying to maintain his sense of self while relying on others for help. It is a film that delivers the authentic aspects of slowly losing one’s mobility while also providing those moments that everyone needs, disability or not, of being uplifted by loved ones and community members. When I Walk showcases a man, who experiences and shares his emotions while trying to continue with his life as a documentarian.

DaSilva didn’t stop creating films and has been working tirelessly on another documentary film, When We Walk, http://whenwewalk.com/. Much has happened in the years since 2013 for DaSilva, and once again he is documenting his life but now with a focus as a father who has a degenerative neurological disease. In the first film, we learn about his relationship with his wife and the happiness his son Jase brings to his life. In this film, he also shares the impact of family dynamics including divorce and the role that played in his adolescence as well as in his marital relationship. Most importantly, When We Walk spreads the message of an eternal love a father has for his son. DaSilva walks us through new barriers faced by a parent with a disability who just wants to be around his son. He highlights issues such as the presently controversial healthcare system and inadequate accessible transportation. Similarly to his first film, When We Walk will bring awareness to disability rights and the importance of inclusion in all aspects of society. Be on the lookout for the release of this film in September of 2018.

Not only has DaSilva been working on the When We Walk film, but is simultaneously creating and acting in a featured film called The Dismantled, http://thedismantled.com/. In this series, he portrays a person, named Billy, who is quadriplegic as a result of having a degenerative disease. Billy is tired of having to rely on others for help and shares the reality of having multiple sclerosis in a “world that encourages [people with disabilities] to be complacent.”  With this, Billy decides to use his new identity to smuggle drugs across the border. DaSilva shares that this series is “Breaking Bad Meets Disability.” Watch the trailer and stay tuned for the release of this compelling film!

Throughout DaSilva’s journey of learning to live with PPMS, he has increasingly become aware of the limitations of transportation, particularly in major cities but also around the world. With emerging technology such as the iPhone 3G in 2009, he realized he could use his design skills to create a tool that would be a database of accessible places. DaSilva mentions that he failed a few times at first, but eventually he began working with a great team of developers and was allotted a grant from Canada to launch their website and application. AXS Map uses open source data to provide users the ability to review public locations such as restaurants and stores for their accessibility. AXS Map is available online at https://www.axsmap.com/ and it is available as a free app for both IOS and Android users - AXS Map v2.

Users of all abilities are invited to review public places with regards to spaciousness, entrances, bathroom and other attributes such as guide dog friendliness. Additionally, you can add comments and photos. To help spread the application and increase the number of reviews, people can host a Mapathon which leads to a fun and engaging way to give back. Reviews such as this are “the gamification of social good” as Dasilva states because it offers people with and without a disability to contribute to society by helping others learn about places that are accessible.

The application has over 160,000 reviews worldwide and continues to grow. Each year, Google employees participate in a Google Serve event which includes hosting a Mapathon and competing against each other to see who can review the most! DaSilva's work has caught the attention of another major organization, the United Nations, and is currently preparing for a large Mapathon in Vienna, Austria and Indonesia to gather data for accessibility in those regions.

DaSilva is branching out to help people in other ways by promoting disability rights around the world through his work with the UN. DaSilva is an expert committee member of the UN Monitoring and Evaluation of Disability-Inclusive and Development. This committee tracks information about accessibility around the world among other topics. They have sustainable development goals, and DaSilva is assisting with an element within the fourth goal, which is ensuring that any and all children with a disability have access to an accessible school.

In February of 2018, the UN will be hosting the World Urban Forum in Malaysia,where discussions will take place regarding the acutest issues as a result of increased urbanization. During this time, DaSilva will be presenting AXS Map and will host a Mapathon. Jason DaSilva humbly shares that he is a bit shocked by how big AXS Map and his movies have gotten and at times it can be a bit intimidating. When asked about changing perspectives, he frankly mentions that the road to acceptance is hard, and even him, who continues to pursue his passions, struggles with sliding back into the “anger and depression stages” but “seeing the impact [his] films and AXS Map has had really helps.”

Stay up to date with the release of the When We Walk and The Dismantled as well as an updated version of AXS Map by following Jason DaSilva on social media - @jdasilvax. 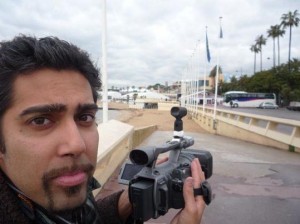