Rolling Through Paralysis with Innovative Technology

Have you ever imagined a lightweight device with the ability to make a paraplegic stand upright, move through doors with ease, and come to him or her at the touch of a button?

Have you ever imagined a lightweight device with the ability to make a paraplegic stand upright, move through doors with ease, and come to him or her at the touch of a button? Matia Robotics has created such a device after decades of research and development: The Tek RMD, their first device created to enable those with walking disabilities to stand and maneuver indoors without someone’s assistance.

The device uses a gas spring suspension system to gently move a paraplegic up or down from their wheelchair while straps around their waist and legs keep them secure as they move. He or she can then move on the device using a joystick and pass through doorways that aren’t ADA compliant from its narrow width. When seated, they have the freedom of moving it away and back again using a remote control. The device is also advertised at $19,995, an affordable price considering similar devices can be up to $40,000.

Although the Tek RMD is an amazing achievement, it took many years to get the RMD to its current state. The company’s founder, Necati Hacikadiroğlu, discovered his passion for developing such devices while in college, and began developing the Tek RMD with a team of scientists and engineers once Matia Robotics began in 2006. After years of research in robotics and input from rehabilitation centers and paralysis foundations, they debuted their first prototype in 2012 at a trade show in Germany. Once it received worldwide acclaim, their handmade prototype went through industrial design, review by manufacturing, and approval from the FDA and CE, which allowed Matia to test the device before selling it to the public. This phase not only included testing by those of the paralysis community, but also from those in laboratories where the device endured extreme scenarios to test its limits, such as spinning the device hundreds of times and halting the breaks while speeding up and down ramps. Now the finished product is shipped to consumers through many distributors across the U.S. and eleven outside the U.S. 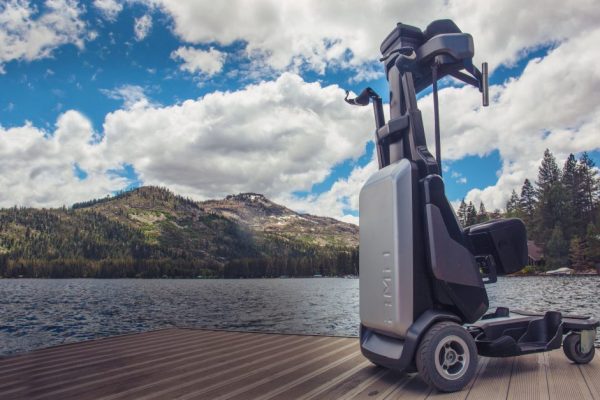 Regardless of the Tek RMD’s capabilities, the most priceless one to paraplegics is something most don’t expect: the ability to look someone in the eye. “As an able-bodied person, generally when you see someone in a wheelchair, your first thought is ‘I really want that person to be able to walk again’…” said Steven Boal during our interview. “…but universally what we hear from people is that they really just want to be eye level” and give hugs to their loved ones. The RMD’s low center of gravity and lightweight design allow someone to do so without the RMD making them taller, which is often overlooked when designing similar devices. Being able to provide such blessings to people is what gives Boal and the entire team the passion to keep creating these devices, with more to come.

Since they only manufacture their devices and sell them through distributors, Matia doesn’t usually showcase anything at events. However, customers can search for an RMD and future devices at their website: https://www.matiarobotics.com/. They’ve also started a contest for one person to get a free RMD! Check it out at  and write your story or vote on your favorite! The contest ends on September30, 2019 at 11:59 p.m. MT. For questions, contact them through the options listed at https://www.matiarobotics.com/contact/.