Sometimes it takes years for a start-up company to attain profits. And sometimes, as with John’s Crazy Socks, a business realizes immediate success.

Sometimes it takes years for a start-up company to attain profits. And sometimes, as with John’s Crazy Socks, a business realizes immediate success. Launched in December 2016, the online retailer is the brainchild of 23-year-old John Cronin who proposed the idea to his father, Mark, before he even graduated high school. Now, the passionate father-son business duo runs this philanthropic-minded enterprise which, in 2018, garnered an impressive $5.5 million in sales!

Then on the cusp of graduating and undecided on a plan for his future, John, who has Down syndrome, expressed interest in entrepreneurship. The company concept wasn’t exactly clear but his overall career goal was: “I wanted to go into business with my dad,” asserts John, who previously worked administrative duties at his father’s office. The creative pair contemplated several ideas, including a food truck (since John is a foodie) but they lacked culinary chops. So John honed in on a simple pleasure that fostered his personal expression. “I’ve worn crazy socks my entire life,” he tells AmeriDisability; and, thus, his fashion statement kick-started a mission statement for the e-commerce site: Happiness through socks!

“We’ve created this social enterprise. It is a different type of business model. It’s both a social mission and a business mission,” Mark explains. And, as it turns out, family makes for a great team. “We haven’t had any fights as partners; expect we had a disagreement over the [phone system] hold music,” Mark jokes, adding, “We each know what our role is. We depend on each other. I can’t do this without John.”

Getting Down to Business

Without formulating a strategic business plan and solely dabbling in minimal social media marketing, sales astonishingly reached $13,000 in the first two weeks alone with rapid continuation. Mark believes customers connected with his “hard-working son” and the core principals of John’s Crazy Socks: to celebrate what’s possible by instilling hope (such as entrepreneurship by people of differing abilities and workplace inclusion); to give back (5% of earnings are donated to Special Olympics); to enable individuality through high-quality merchandise (2,300 different pairs to be exact); and to display gratitude (by including candy and a thank you note penned by John in every package).

Mark credits his son’s go-getter attitude as a driving force. “John didn’t see barriers [to starting the company]; there was no fear. He just matter-of-factly thought, ‘here’s a good idea and we should do this,’” Mark describes. Timing likely helped too. Soon after John’s Crazy Socks opened shop, World Down Syndrome Day neared. Coincidentally, people observe by wearing silly socks. “We looked for Down syndrome [themed] socks that we could sell but couldn’t find any. So John said ‘we should make them,’” Mark recalls of what inspired John to design his first of many socks varieties. The site also sells socks crafted by others.

“We’re tapping into an untapped workforce – people of differing abilities,” Mark reveals, adding, “We want to show what people with differing abilities can do.” As of early 2019,John’s Crazy Socks has 39 permanent employees, 23 of whom have differing abilities; and 30 more temporary employees tackled the influx of sales during the 2018 holiday season. Much of the staff works part-time hours because Mark and John want their employees to have a happy work-life balance.

Hiring individuals who have disabilities is a wise business decision, according to Mark. He describes his staff as reliable and dedicated. “They care about the work they do. Because we’ve created this unified workplace, we have high moral, high productivity and retention is through the roof. It helps us recruit people because everybody benefits ─ not just those with differing abilities. People walk in and, right away, feel the energy,” he says. Great work ethic combined with quality products is what allows John’s Crazy Socks to compete with giant merchants like Wal-Mart, Target and Amazon. And same day shipping is an added bonus!

In keeping with the “crazy”nature, employees have spirited job titles. A Sock Wrangler, for example, fulfills orders in the fast-paced “pick-and-pack warehouse.” And as Co-founder and CHO (that’s Chief Happiness Officer), John has his hands (and well-dressed feet) in many facets, such as sock design, sock wrangling and marketing through media interviews and videos (to the delight of his 217,000+ Facebook followers). 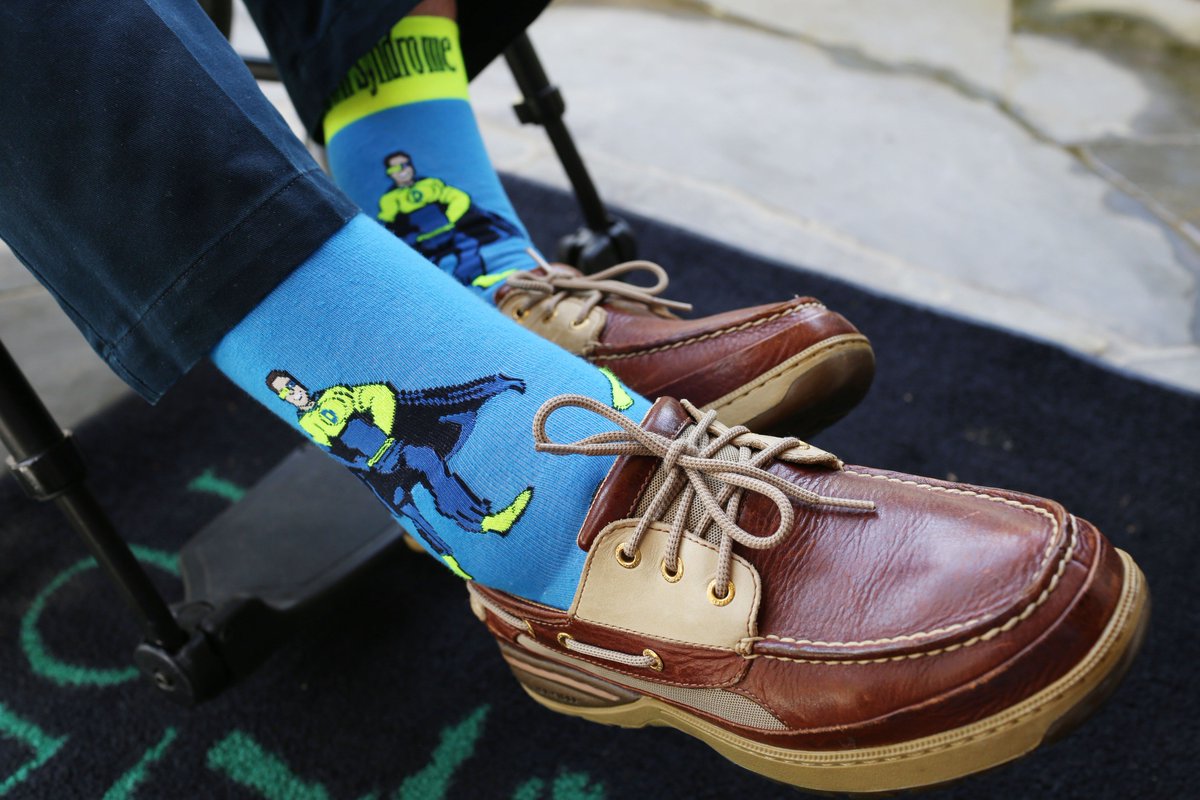 In 2007, President George H. W. Bush was diagnosed with vascular Parkinsonism, which arises from vessel issues in the brain regions. It actually does not meet the criteria for Parkinson’s disease, according to the Parkinson’s Foundation, but mimics conditions of the disease. It affected the Commander-in-Chief’s ability to walk and, in his later years, rely on a wheelchair. The seated position raised his pant legs to above the ankles and, like John, the conservative leader found happiness by wearing radical socks.

After learning they shared an appreciation for fashionable footies, John sent a package to the 41st President filled with socks that aligned with his known interests (i.e. Texas, Republican Party, BBQ, etc.). The self-proclaimed “sock guy” took to Twitter to tweet a photo of his vibrant Down Syndrome Superhero Socks (designed by John). The shout-out was, needless-to-say, good for business! The social post was certainly not the President’s first public declaration of support for people of all abilities. “His signing of the Americans with Disabilities Act [in 1990] and his support of that changed the world. The inclusion school that John had would not have existed. The opportunities that John and others have had [including John’s Crazy Socks] would not have happened without that law. It gave legal support to the rights of people with differing abilities to be able to live productive lives like everyone else in society,” Mark declares.

In April 2018, President Bush asked John to outfit his socks for the funeral of Barbara Bush. He chose LibrarySocks for Literacy in honor of the former First Lady’s three-decade-long commitment to enhancing literacy. “It’s very touching to think that a President of the United States connected with my son,” Mark humbly states. When President Bush passed away in December 2018, the Cronin’s traveled to Washington, D.C. to pay their respects to their stylish friend. “I really miss him,” John shares.

John’s Crazy Socks donates 100% of profits from Library Socks for Literacy ($8-12) to the Barbara Bush Literacy Foundation; plus, $2 from each pair of President George H.W. Bush Unisex Crew Socks ($14.99). 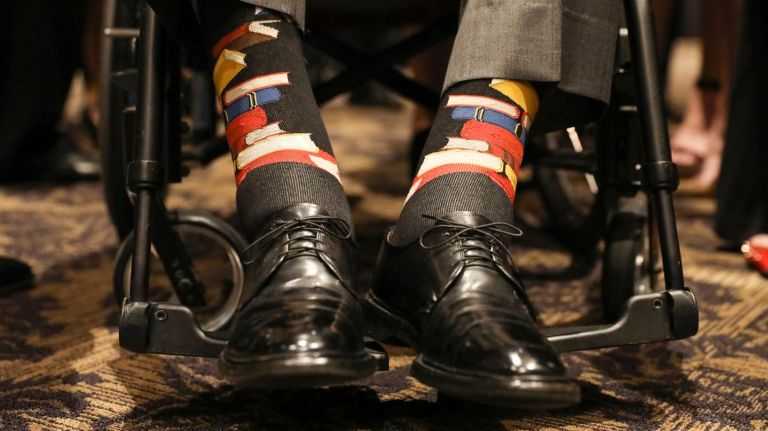 John’s Crazy Socks has a School Tour Program designed to inspire young adults with John’s example of finding happiness despite perceived obstacles. Available in-person or via Skype at no cost, the experience is intended for high school level special education classes (though applicable to others). John personally leads the tour offering first-hand insight into entrepreneurship, inclusive jobs and sheer determination. “My advice is to follow your dreams, follow your heart and make your dreams come true,” he says. Attendees get a glimpse into the business operation and receive complimentary socks and candy.

Open for Business… and More

“It makes me feel good,” John admits on achieving his aspirations. He’s now playing a part in making the same possible for others. In February 2019, John’s Crazy Socks awarded 19-year-old Garret Nichols, of Clinton, Arkansas, with the first annual Autism Can Do Scholarship, a sponsorship to help people with autism achieve their dreams. The $3,000 gift allows Garret to attend Inclusion Films School, a California-based filmmaking program for people with developmental disabilities. Also a fan of dancing, singing and movies, John is breaking into the Hollywood scene too with two pending projects with actor Joey Travolta – a sock deal and an onscreen role!

To pair your own happiness with vibrant footwear, visit JohnsCrazySocks.com. Share a photo of yourself wearing John’s Crazy Socks and tag AmeriDisability on Facebook and Twitter.