The interPLAY Orchestra Strikes a Chord with Inclusive Ensemble

Everyone is born with a musical gene, attests Paula Moore, a conductor who says she’s seen proof in both her personal life and professional life.

Everyone is born with a musical gene, attests Paula Moore, a conductor who says she’s seen proof in both her personal life and professional life. Research published in Frontiers in Psychology backs the notion too. The scientific article, in part, states that “the general capacity for human beings to perceive, produce and enjoy music even in the absence of formal music training suggests that music may be ‘hardwired’ in our genetic makeup.” Environmental factors and ones commitment to practice, of course, play into musicality as well but, generally speaking, everyone has music ability. Research aside… three decades ago, Paula inexplicably uncovered the science of syncing performers of all abilities. She founded the interPLAY Orchestra, a nonprofit inclusive of adults with (and without) mild to moderate cognitive and physical disabilities.

“The name [interPLAY] signifies the relationship between us all ─ new, amateur and professional musicians ─ playing together for the enjoyment of the wider community,” Paula explains. She chose the namesake because she believed a harmonious relationship could and should exist in the musical arts world.

Based in Bethesda, Maryland, interPLAY has more than 50 performers of which 32 have disabilities. Volunteer high school/college students and semi-professional/professional musicians, called “bandaides,” participate too. The group performs three concerts throughout the year which are augmented by guest artists and open to the public.

Ben James, a law student at the American University Washington College of Law, looks forward to assuming his bandaide role each Monday night at rehearsal. “I enjoy that I get to combine my musical talents with my desire to help those around me,” says the guitarist/percussionist, adding, “It serves as a weekly reminder of what’s really important, and helps keep me grounded when I get stressed about other things in my life.” Music is, in fact, widely recognized as a stress-reliever but Paula affirms that interPLAY does not facilitate music therapy. “If there is any [therapeutic aspect] there, it is creeping in in spite of us,” she says. The focus, rather, is music training, collaboration and performance.

Beat of a Different Drummer

Almost all of interPLAY’s musicians had no prior training, with the exception of a few vocalists; and yet all found the beat. “I am always in awe of the talent that our orchestra members bring despite their varying degrees of differences and disabilities,” say interPLAY’s producer Rose Kobylinski. That aptitude is undeniably nurtured by Paula who is a “volcano of talent and ability,” according to Emma Illarramendi. Her 44-year-old son J.P., who has diabetes and Down syndrome, has been with the orchestra since its inception. Like his band mates, J.P. holds a job; he works as an usher at the Kennedy Center or Performing Arts in nearby Washington, D.C.

“J.P doesn’t read music and neither do most of the musicians. They memorize the music,” Emma says. Paula adds, “I had to learn nontraditional conducting gestures because traditional orchestral conducting was too much motion [for some].” The teaching techniques that she and associate conductor Paul Bangser use are different but the complex music is not. “We do not rewrite music; we play it as it is written,” Paula affirms of the repertoire which spans all musical genres. The group uses an array of orchestral percussion instruments, plus an assortment of foreign-origin and unconventional instruments.

Though the orchestra is a cohesive ensemble, Paula fosters confidence building to help each individual grow. For example, at rehearsal, all perform a solo to be critiqued by bandmates. “In the beginning, everyone was scared [to offer criticism]. Then it got to them that someone has given them permission to be critical; and no one ever gives them permission to be critical,” Paula explains. She prompts the processes with thought-provoking questions, like ‘How did it make you feel?’

In addition to music enrichment, members enhance language and social skills, memorization, friendships and other advantages. “I enjoy the camaraderie of being a part of an organization that seeks to lift people up through music,” says interPLAY’s director of choral music Patrice Adams, adding, “The relationships I have acquired through my participation in interPLAY have enriched my life immensely.” 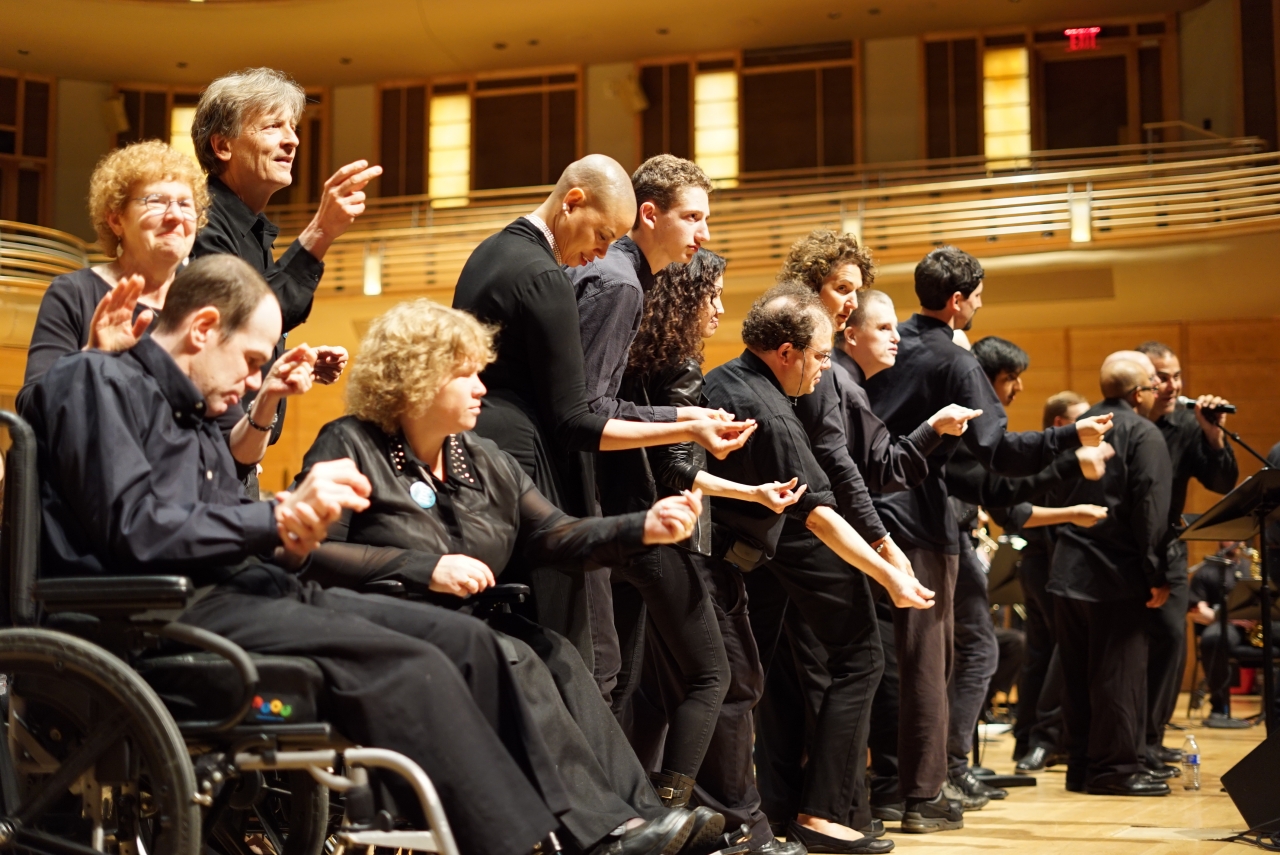 interPLAY is one of the most unique orchestras of its kind thanks to its world-class home stage at the Music Center at Strathmore. This16-acre artistic locale includes three venues with stellar acoustics and several artistic partners. interPLAY holds rehearsals and sell-out concerts onsite in the 200-seat ballet suite. interPLAY has performed additional shows at local spots too.

Paula describes herself as a life-long performance musician but credits her son, Mikey, who has Down syndrome, as her inspiration for interPLAY. All three of her children are tuneful but Mikey displayed impressive ability from infancy. “We started playing Peter and the Wolf for him and by the time he was one or so, he was singing along and knew all of the different instruments that portrayed the different animals in the story,” she recalls. Now as an adult, Mikey plays the handbells and cello. He’s even graced the stages of Carnegie Hall and the Lincoln Center!

The establishment of interPLAY filled an opportunity gap.“I was seeing wonderful things for children but, as they got older, that got lesser and lesser,” Paula recollects of her calling to advocate. She first founded Special Kids in Publishing, a photo/journalism project for students with disabilities in collaboration with non-impaired students. Then, in 1989, Paula formed the Mighty Special Music Makers which morphed into the interPLAY Orchestra. “We are very serious about what we do and how we did it. It isn’t that we don’t have fun – we do – but everyone knows that this is a serious enterprise,” Paula says.

interPLAY relies on generous supporters; donations are graciously accepted. Contributions afford sheet music, percussion instruments and member scholarships. interPLAY will next perform “A Musical Multi-Media JAM!” on March 8, 2019 at Strathmore. It will include percussion, art, poetry and more with special guest percussionist Thomas Teasley. Those interested in joining interPLAY must be comfortable with loud music and be willing to be interviewed and evaluated for admittance.