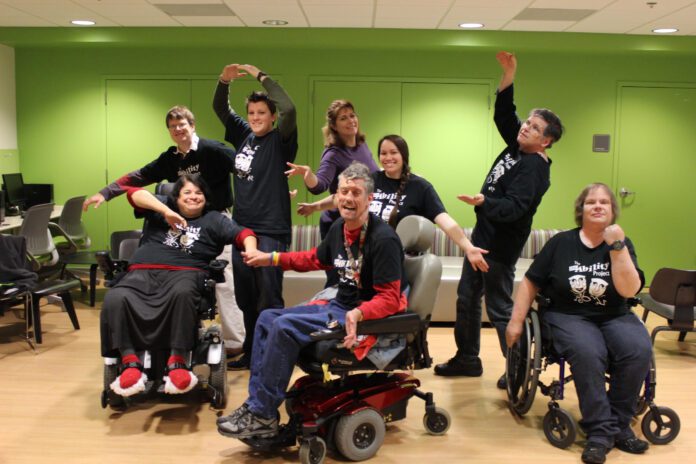 Non-disabled actors play approximately 95 percent of television characters with disabilities in top ranked shows, according to a study by Ruderman White Paper. Data pertaining to stage actors is pretty much non-existent, but odds are statistics are similar to or, more likely, skewed even worse. Simply put: 5 percent doesn’t come close to matching up with viewer demographics. You see, data published by the U.S. Census Bureau cited that nearly 20 percent of the population has a disability – over 56 million people. That means that representation of characters portrayed by actors with disabilities is, at a minimum, off by 15 percent.

In recent years, Hollywood has made a push for more inclusion; specifically pertaining to women and people of color, with some focus on actors with disabilities. While stage entertainment doesn’t quite reach the masses like television, a nationwide grassroots effort to cast actors with disabilities seems to be picking up thanks to inclusive theater troupes. And we say “Bravo” to that!

Here are nine theater troupes that deserve a standing ovation:

The Big Apple is known for the biggest and best theatrical opportunities. And the Identity Theater Company wants to ensure that such opportunities exist for all, including “differently-abled artists,” and so their mission is to: present work that cultivates understanding, promotes tolerance and engages its participants in meaningful discussions. Founder and executive director Nicholas Linnehan tells AmeriDisability that, in 2019, the company is slated for at least one adult show, one children’s show and a reading series of new plays. Plus, Identity recently filmed its first original piece, Catfish?, which Nicholas hopes will be showcased at festivals. He says because “imagination knows no disability,” he encourages collaboration between disabled and non-disabled performers to push boundaries and make the impossible possible. “By doing this, we aim to let the talent, not the ability level, speak for itself,” Nicholas explains.

The Identity Theater Company has traveled, thus far, throughout the five boroughs and to Yonkers. But, as an advocate for inclusion, Nicholas’s message should be heard worldwide: “It is no longer acceptable, in my opinion, to have an able-bodied person play a disabled character when there are so many capable disabled actors out there. Furthermore, just because a character is not specifically written for a disabled person does not mean that a disabled person cannot play that character effectively. If acting is rooted in pretend, then why can’t we open our eyes and hearts to the abilities that are out there and that are going unheard?”

The Uppity Theatre Company, which has been “creating performance and working for social justice since 1989,” is known for thought-provoking show themes, like gay rights, gender issues, racial justice and also inclusion (thanks to its DisAbility Project). This award-winning inclusive company of teens and adults primarily travels to school, organization and community events throughout Missouri and Illinois to perform their “disability rap;” theater shorts, such as ‘Hello’ about a child who wants to say hello to someone in a wheelchair; and dance pieces, such as ‘One World’ about the prevalence of disability internationally and, thus, the need for supportive inclusion. Further embracing a global perspective, the company has hosted visitors from abroad who wanted to study Uppity’s inclusive techniques.

“We create our work from scratch as an ensemble based on story circles, dialogue and improvisation; although, we also commissioned a disabled-version of The Adventures of Tom Sawyer,” producing artistic director Joan Appell Lipkin tells AmeriDisability, adding, “We have performed for over 100,000 people and our work is included in the permanent collection of the Missouri History Museum. And we are one ofthe first and oldest companies to focus on disability in the country.”

Mothers have a way of making things happen for their children despite all odds. So was the case when Sam (who goes by her first name only) was asked by her adult son who had developmental disabilities, “When is it going to be my turn [to act on stage]?” Since Sam was the theater arts coordinator at the Phoenix Day School for the Deaf, her son often watched but he dreamed performing. When Sam couldn’t find a program for people with cognitive disabilities, she launched one herself called the Detour Company Theatre. “Detour is committed to making opportunities possible. We are called ‘Detour’ because that’s what we do… we take many detours [because of individualized paths] but we all arrive at the same destination to provide entertainment and enjoyment,” Sam explains. Detour has approximately 50 actors, most of whom have cognitive impairments and some who have physical disabilities. To give troupe members as many opportunities as possible, Detour puts on double features – recently presenting Shrek The Musical and Legally Blonde The Musical in the same weekend – to double cast actors as a lead in one play and an ensemble member in the other.

Detour offers a beginning/intro program (ideal for novice actors and those who prefer smaller group settings), a main stage show-based troupe and a touring troupe. Audience admittance is free of charge and includes audio description and American Sign Language (ASL) interpretation. “We’re funded by miracles! And donations and grants. We don’t charge per ticket – that’s the last big area of accessibility because we welcome everyone to our shows,” Sam says. The audience setting is equally inclusive; for example, a parent whose child has autism that perhaps typically shies away from theater shows can feel comfortable and enjoy Detour’s entertainment.

The Apothetae’s founder and artistic director, Gregg Mozgala, shares on the company website that the namesake translates to “the place of exposure.” As a decorated actor and playwright, who happens to have cerebral palsy, Gregg wanted to create a platform for conversations around disability. He says, “One of my company’s primary goals is the creation of new full-length plays that will make visible the ‘disabled experience,’ both personal and collective, throughout history.” And that’s what makes Apothetae such a unique company as it engages both actors and playwrights who are disabled and non-disabled. Aside from stellar original productions, Apothetae presents established material inclusive of disability-related themes, such as Oedipus, Richard III and The Elephant Man.

Barrier-Free Theatre Company executes an immersive process that empowers its actors (adults with intellectual/developmental disabilities and autism) to influence the script.The creation of original one-act plays starts with improvisational exercises and drama games, which helps to formulate the show’s plot and characters. Barrier-Free attests that their unique rehearsal and performance model “hones social skills, creative thinking, group collaboration and confidence. These key skills are then transferrable to other areas of life such as: employment, school, professional and personal relationships, etc.”

Blending ASL and spoken word on stage for more than 50 years, the Tony Award-winning National Theatre of the Deaf is the longest existing touring company in the United States! NTD has performed in all fifty states, on all seven continents, at the White House, on Broadway and appeared on the Disney Channel and Sesame Street, among other accolades. The company holds performances, workshops, trainings and community outreach activities. 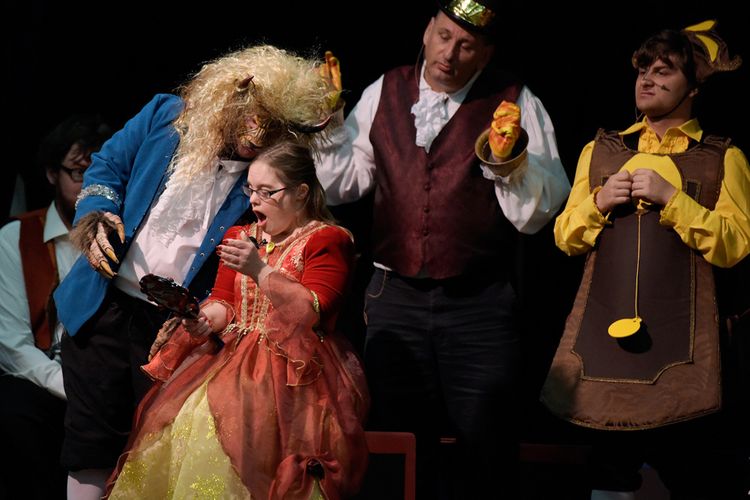 This Off-Broadway theater is celebrating its 40th season. For almost three decades, the company operated as Theater by the Blind; then, in 2008, updated its name and mission to be fully inclusive of other disabilities. The philosophy: “Disability is the only diversity that cuts across all racial, gender, social and class distinctions. Disability knows no age, race, religion, gender, culture or sexual orientation. As such, we view disability as a common ground, where the voices from every sector of our society can come together to be represented and expressed.”

For three decades, Phamaly, which stands for the Physically Handicapped Actors and Musical Artists League, has produced an array of productions. The 2019 schedule features original theater pieces (including an educational touring show and a one-act play), acting and singing workshops, and other opportunities for both actors and playwrights.

Founded in 1991, Deaf West Theatre describes itself as “the artistic bridge between the deaf and hearing worlds.” The company helped to bridge a very specific cultural gap in 2015 when they brought the Tony Award-winning production of Spring Awakening to Broadway in New York City. A cast of deaf, hard-of-hearing and hearing actors wowed audiences with a vibrantly choreographed production of spoken word, song and ASL. 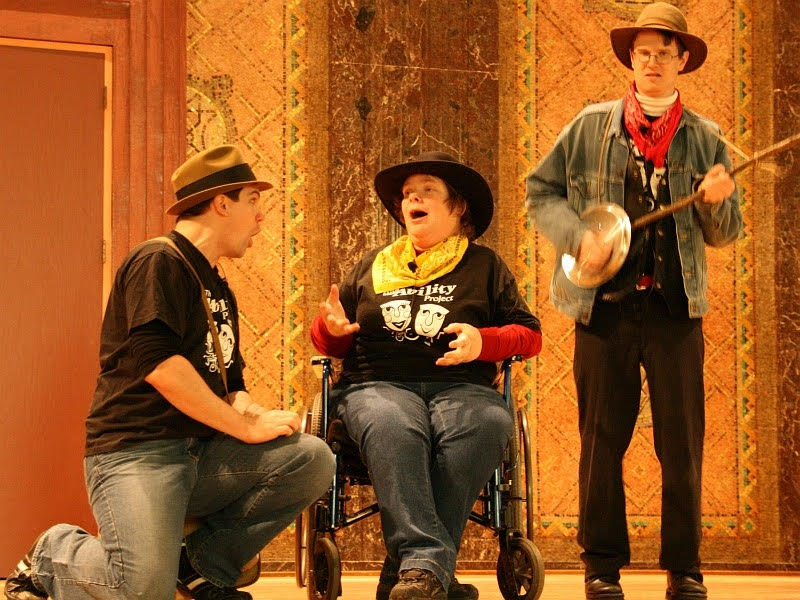 Start Your Own Theater!

The Dionysus Theatre was founded by Deborah Nowinski in memory of her son, Dustin, who died of bone cancer at the age of 15. He wanted people to “look beyond the label” and accept each person. For 21 years, Deborah brought his vision to life through inclusive theater in Houston. The Dionysus actors recently took their final stage bow so Deborah could follow her passion to reach an even larger audience with her message of inclusion in the arts. Deborah authored the award-winning book “Your Role in Inclusion Theatre: The Guide to Integrating Actors with Disabilities and Nondisabled in Your Theatre and Classes,” and she also coaches educators through lecturers on how to implement inclusive initiatives. If you’re interested in launching an inclusive program, check out her book on Amazon.