Theater Breaking Through Barriers Making Theater Possible for All 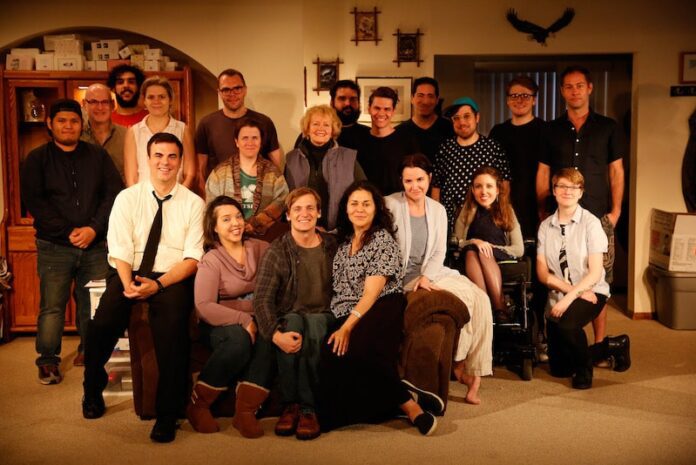 “All the world’s a stage,” Shakespeare would have said, but most people don’t have those with disabilities in mind when watching theater. Except for one man: Ike Schambelan. Until his passing in 2016, and because of his passion for Shakespeare, Schambelan directed his own Off-Broadway theater company, Theater Breaking Through Barriers (TBTB), to showcase the writing and artistic talents of those with all abilities. TBTB originally started in 1979 as Theater By The Blind, and became well known not only for performing unique interpretations of Shakespeare, but also for plays that featured blindness and disability.  As the company grew over the decades, more artists came on the scene with other disabilities, and they changed to their current name in 2008 to more accurately reflect their mission.

TBTB produces different types of plays: those that feature disabilities (for example, “Whattaya Blind?!” an exploration of how society looks at blindness) and other plays that feature Schambelan’s interpretations of Shakespeare, where the actors showcase their talent.

According to Nicholas Viselli, the current artistic director at TBTB, “disability matters as much as they want it to” for each of the plays. After hiring talent through open auditions, TBTB starts each play by interpreting scripts and building the world of their story on stage. From there, they collaborate with each artist to figure out how to tell the story with their various abilities in mind. If the script has a character turning a cartwheel, for example, and an actress can’t do that, they would work with her by creating an accessible prop or coming up with another alternative adaptation to the scene. In the end, each person involved uses their talent to put on professional, quality theatre.

But through all the workshops, and drama, their main goal is to simply change people’s perceptions one step at a time. Viselli says that society has come along way in accommodating people with disabilities, but the age-old assumption of serving them out of pity is still prevalent largely because people with disabilities aren’t seen that often in theater or portrayed accurately in other mediums. But this isn’t to blame solely on society, either. Viselli realizes that we all have this engrained sense growing up that someone’s life must be more difficult when they don’t have the same capabilities mentally, physically, and emotionally. This assumption is a limitation, and artistic avenues like theater can spark change by showing a different perspective. Many times, people come out of TBTB’s plays saying, “Wow, that was really good! Where was the disability?” That comment is the greatest one Viselli could ever receive, and summarizes the goal of their company: to prove that everyone is a person capable of pursuing anything they want to regardless of their limitations, needs and differences.“Anybody can become disabled at any time,” Viselli says, “and that makes our work common ground…and it allows us to talk to, about, and for everyone.”

TBTB also helps prospective thespians grow in their craft by offering classes, play readings, and an Intensive Playwright Workshop which showcases the talents of current and prospective members. They’re offering more workshops in 2018. To learn more about their work and upcoming opportunities, visit their website or email Viselli at tbtbinfo@gmail.com.

Photo from the production Healing (2016)