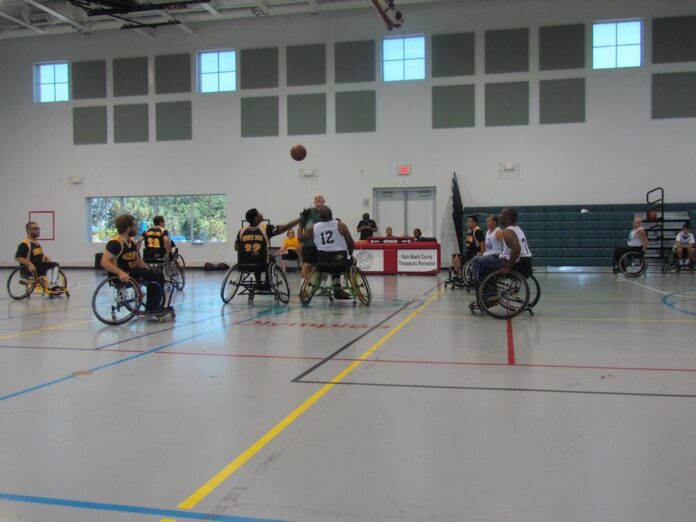 Denise De Mello spends much of her time on the boccia court at the Club Managers Association of America Therapeutic Recreation Complex, a Paralympic sports facility equipped with a swimming pool, athletic center and adaptive equipment rentals in Lake Worth, Florida. Not familiar with boccia? “It’s similar to the Italian game of bocce. It’s an interesting game with hand-eye coordination,” says Denise. Played indoors, boccia athletes throw, kick or use an assistive device to propel leather balls as close as possible to a white target ball (the jack). “I hadn’t played wheelchair sports before, so I thought this sport was a good introduction,” she explains. Denise was initially misdiagnosed with cerebral palsy before doctors discovered that her disability actually stemmed from a benign tumor on her spinal cord; but the now 57-year-old hasn’t let her disability slow her down.

Denise learned about adaptive recreation about seven years ago at a gathering of people with physical disabilities. “I got involved [in the group] because I wanted to be more active,” she explains. That objective was shared and, so, the informal assembly formerly obtained 501(c)(3) nonprofit status as Endless Possibilities, an organization that provides adaptive sports and recreation.

Endless Possibilities started with wheelchair rugby play. “The game was first developed in Canada as a team sport for quadriplegic athletes, and was originally known as ‘murderball.’ It was a very intense game of players in metal wheelchairs going full speed on a court crashing into each other,” Denise describes. While a level of competitive enthusiasm remains, though with a new focus on positive teamwork, the sport ─ known in the U.S. as quad rugby or wheelchair rugby ─ challenges players to bounce or pass a ball every 10 seconds to, ultimately, carry it across the opponent’s goal line to score.

Endless Possibilities now offers eight programs: boccia, as described above; goalball, a court game played by visually impaired athletes using an audible ball; handcycling, using an upper-body powered bicycle; power soccer, an indoor version for power wheelchair users; sitting volleyball, adaptive with a lower net and players seated on the court floor; sled hockey, a sit-down version of the sport with two sticks dually used for mobility and play; wheelchair basketball, similar to traditional play for wheelchair users; and wheelchair (or quad) rugby, as previously defined. “Our vision is to expand to include more Paralympicsports,” Denise declares. Endless Possibilities’ programs are offered year-round typically with one to two opportunities per week and are co-ed. Currently, about 100 members ─ ranging from teenagers to seniors ─ participate in both recreational and competitive play depending on the sport.

Endless Possibilities welcomes all individuals with physical disabilities regardless of sport skill level. “We encourage you to come out and at least try something. Every time a new person comes out, they get a big happy smile and say ‘I never thought I could do that!’ We want people to try as many sports as they want to experience that sense of enjoyment,” Denise says. Additionally, members gather socially. “Our monthly meetings are more of a peer support to talk about what’s been going on with one another. We talk about new technology and what is available in [adaptive] sports. But’s it’s a social gathering with people who face similar things so we talk about much more than sports.”

Thanks to support from the Christopher and Dana Reeve Foundation, monetary grants and private donations, membership is free! “Endless Possibilities is run completely by volunteers who want to help out, make sure our chairs are working fine for members and are focused on helping to put 100% of donations back into the programs so everyone can participate at no cost,” Denise proclaims. To learn more or to contribute, visit EndlessPossibilitiesForDisabled.org