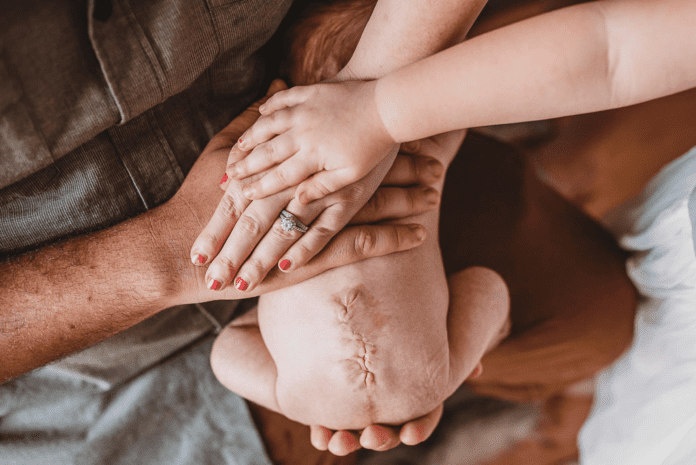 Twenty-three weeks into her pregnancy, 26-year-old Jessica Trinkle hoped to catch a sweet glimpse of her baby during a routine ultrasound. During the anatomy scan, however, her obstetrician noticed that Jessica’s unborn son, Parker, had a lesion on his spine. After further testing, Parker was diagnosed with spina bifida, a type of neural tube defect that occurs when a baby’s neural tube fails to develop or close properly, as defined by the Spina Bifida Association.

What is Spina Bifida?

The exact cause of spina bifida isn’t clear; though experts believe genetic and environmental factors, such as a family history of neural tube defects and folate deficiency, play a role. Spina bifida occurs in the early stages of pregnancy and the severity can range from mild to severe ─ impacting one’s physical and mental condition ─ depending on the size and location of the opening. It’s estimated that about 166,000 people in the U.S. live with spina bifida.

A Backbone of Hope

Looking to educate herself about spina bifida, Jessica discovered an online support group comprised of fellow mothers and learned about maternal-fetal surgery. While surgery is not a cure for spina bifida, research finds that this prenatal intervention can achieve significantly better outcomes than traditional postnatal repair. Favorable results outlined in the Management of Myelomeningocele Study, known as the MOMS Trial, found that fetal surgery greatly reduces the need for a spinal shunt at birth and improves the child’s mobility and leg function.

While the surgery is complex, the decision was a no brainer for the Trinkles. “We were looking for a proactive way to best benefit his quality of life,” Jessica tells AmeriDisability. Because spinal cord damage is progressive during gestation, prenatal repair of myelomeningocele, the most common and severe form of spina bifida (which occurs in approximately 4-in-10,000 live births in the U.S.), may prevent further damage.

Currently, there are only 13 fetal surgery centers in the U.S. that perform this kind of procedure. Luckily, one had just opened about two hours away from the Trinkle’s home in Palm Coast. The first and only hospital in the state of Florida to offer the innovative approach, Orlando Health officially launched its open fetal surgery program in May 2018, in conjunction with its sister site Winnie Palmer Hospital for Women & Babies. In about a year’s time, Orlando Health worked 11 cases (Jessica and Parker were the program’s fourth).

The fetal surgery program at Orlando Health began with the recruitment of Samer Elbabaa, MD, a pediatric neurosurgeon who has performed more than 75 of these intricate procedures in his career. “At Winnie Palmer Hospital, we see an average of 14,000 births a year and this program is truly meeting an important need here in Central Florida and across the state,” said Dr. Samer Elbabaa. Because the delicate surgery actually involves two patients – the expectant mother and her unborn baby – a comprehensive team works closely together to open the uterus and close the defect on the baby’s spine. Jessica says her surgery included a crew of about 13 doctors and nurses, who made a 10-inch incision into her abdomen, followed by a 5-inch incision into the uterus.

Spina bifida screenings are common practice in prenatal care. Many cases of spina bifida are suspected based on a blood test, and further evaluated via ultrasound around 18-20 weeks for diagnosis confirmation. “The inclusion criteria is basically a mother and fetus that are overall healthy, except for a severe spina bifida defect,” Dr. Elbabaa tells AmeriDisability. There are several specific qualifiers, for example, “the level of the spina bifida has to be between T1 and S1, basically mostly in the thoracic/lumbar region; and the fetus has to show evidence that the spina bifida already impacted the anatomy of the brain causing the condition called high brain or Chiari malformation. The base of the skull becomes crowded because of the spina bifida in the lower back, so we attempt to close the spina bifida early to reverse some of this abnormal anatomy,” Dr. Elbabaa explains.

Generally speaking, Dr. Elbabaa says the majority of referred mothers and children do qualify. Jessica says she underwent psychological evaluations, genetic counseling, blood work, an amniocentesis and was required to have a post-surgery support system. The in-utero surgery typically is conducted between 19 and 26 weeks of pregnancy. According to Orlando Health, there is less evidence for improvement in the child’s condition if the surgery is performed after 26 weeks. Following the surgical intervention, expectant mothers usually are hospitalized for several days and remain on modified bedrest for weeks to limit the risk of preterm labor. According to the MOMS Trial, the best case scenario is to keep the mother pregnant until 37 weeks, however the surgery is considered successful if she delivers after 30 weeks. In half of the cases in the MOMS Trial, the mothers’ water broke early and delivered closer to 34 weeks.

Because deliveries are via C-section, the baby is miraculously considered “twice born.” Jessica and her husband, Spenser, welcomed Parker (at a healthy 5-lb., 5-oz.) on February 6, 2019 (at 37 weeks), joining his big sister, 3-year-old Aria. Jessica says she is certain the surgery was the right medical decision. Parker was the first baby born at Orlando Health with spina bifida to bypass the NICU. “Parker’s lesion opening starts at L1 and goes down. He functions as if it was at an L4 or L5 level [thanks to the surgery]. So he is able to move his hips and knees just fine and we’re working on ankle and foot movement,” Jessica describes.

Spina bifida is a life-long condition and, following surgery, Orlando Health advises families to continue working with a multidisciplinary team of pediatric specialists, including neurosurgery, orthopedics, urology, gastroenterology and rehabilitation as well as physical, speech and occupational therapy. Parker attends physical therapy twice a week. “All of his milestones are pretty much on time,” Jessica happily reports. “He is getting fitted for his first pair of orthotics so he can start practicing weight-bearing on his feet to work on standing.”

In 2017, the American College of Obstetricians and Gynecologists issued guidelines encouraging providers to inform mother’s about surgical options. The guidelines, in part, read: Women with pregnancies complicated by fetal myelomeningocele who meet established criteria for in-utero repair should be counseled in a non-directive fashion regarding all management options, including the possibility of open maternal-fetal surgery.

This medical advancement is relatively new and, thus, postnatal repair remains the current standard of care for myelomeningocele, according to Dr. Elbabaa. However, he expects open maternal-fetal surgery to become the go-to standard for qualifying patients within the next 5 to 10 years. If you are pregnant and seeking information, review the Spina Bifida Association’s Expectant Parent’s Guide.

Share
Facebook
Twitter
WhatsApp
Email
Previous articleBootifully Adaptive Halloween Costumes for Trick-or-Treaters of All Abilities
Next articleMedicare Open Enrollment: How to Save Money Next Year
Nancy DeVaulthttps://www.ameridisability.com
Nancy is the managing editor of AmeriDisability. She is an award-winning storyteller passionate about health and happiness.