Graphics & Gratitude: How One Man's Life-Changing Disability Changed His Career and More

How a life-altering event inspired a new career...

Fifteen years ago, Alec Wilson had no idea graphic design would be in his future — in fact, he wasn’t even thinking about his future. That changed when two thieves threatened to rob him near his car. He survived the attack, but suffered three shots in his back; one which caused nerve damage to his legs and left him with immobility in his feet. He’s now used to using braces and a wheelchair to get around, but the initial transition posed a humbling challenge: “It was all on the go, trial and error” with no guarantees.  Wilson is grateful to be alive, regardless of the fact that he is now relies on a wheelchair.

Along with adjusting to his new day-to-day limitations, Wilson decided to change careers because his restaurant job became too difficult to manage. He wasn’t sure what to do until his mother suggested graphic design, reminding him of the kid’s menus he had designed when he was young. After going back to school to study graphic design, he began with ad design and started Memphicity Design in 2010 doing business cards in his garage. As his business grew from business cards to t-shirt designs, he found his main challenge was navigating such a confined space, his garage, in his wheelchair. Once he got a larger space, however, he also obtained equipment that allowed him, while in his wheelchair, to perform essential functions most people would do without a wheelchair, such as apply thick ink across each screen for logos, while in a wheelchair. Other than that, his process for printing designs is like any other: Once the logo is created, he separates the colors of the logo and prints them all on their own separate transparencies. The films are then lined up and exposed onto a screen, each being put on the press for the shirts once rinsed and dried. 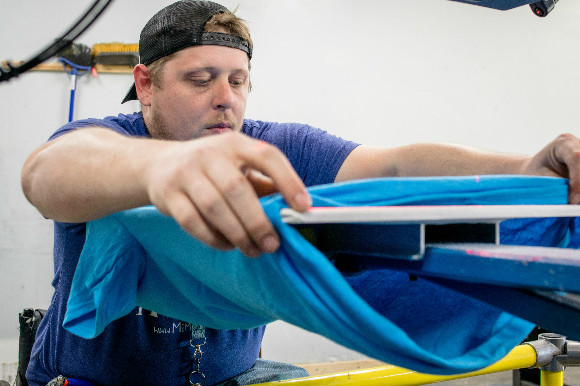 Wilson collaborates with his clients on logos and t-shirt designs, but his favorite designs are the Grizzlies themes that are popular in Memphis for the work he’s done and printed over the years. While he spends most of his time printing shirts and logos, he’s often seen at festivals in Memphis showcasing his designs.

When asked what he thought about society’s views on disabilities, he gave a humble and realistic answer. “I think most people do not think about it all. For me, it just wasn’t something I thought about until in this situation and that is unfortunate.” But that doesn’t mean he has a grim outlook on life. After surviving the theft and debilitating gunshot wounds, Wilson says, “Every day I wake up is a good day.” For those starting their own business, his advice is to “work hard and do your best. Every successful person has failed at some point. Don’t let failure get you down, keep pushing.”

To learn more about his business, visit the Memphicity Design website. For custom screen printing visit MemphisShirt.com/screenprinting or email Wilson at alec@MemphisShirt.com.