One may assume that tiny homes are ill suited for individuals with disabilities, more specifically those with physical limitations or wheelchairs. However, though customization, that’s not the case.

Tiny homes have become a big deal in real estate. Thanks, in part, to television shows like HGTV’s Tiny House Builders and FYI’s Tiny House Nation, compact structures are now an enticing alternative for many; from young professionals embracing a minimalist lifestyle, to seniors wanting to downsize, to individuals looking to reside beside loved ones.

What is a Tiny Home?

In 1973, the average American home was 1,660-square-feet, according to the Census.gov. Perhaps in alignment with society’s ‘bigger is better’ culture, the average home today is 2,392-square-feet. In recent years, for some, focus on being more conscious and intentional with one’s surrounds has gained popularity. The Tiny Life, an online source dedicated to the tiny home movement, says tiny homes are, well, tiny and typically range between 100 to 400-square-feet – some are permanent structures, others are transportable on wheels. The tiny home world has grown to include other small accessory dwellings (and even sized a pinch bigger, like 500 to 1,000-square-feet) with the option to attach to an existing home. But unlike RVs, which are designed for travel and temporary living, tiny and/or small homes can be designed for enduring use.

One-Size Can Fit All

One may assume that tiny homes are ill suited for individuals with disabilities, more specifically those with physical limitations or wheelchairs. However, though customization, that’s not the case. Julie Lineberger, President of Wheel Pad, tells AmeriDisability Services, “If someone wants to live in a tiny home, they should be able to whether they have disabilities or not.” Her company caters to home-seekers with mobility disabilities, such as spinal cord injuries, ALS, multiple sclerosis, cerebral palsy and disabled veterans. “Wheel Pad is not a stand-alone tiny home. It is meant to be attached to an existing home for inclusion in family life. It can be a temporary or permanent attachment depending on the family circumstances, zoning, etc.,” describes Lineberger. Though, Wheel Pad will roll out designs for accessible, free-standing tiny homes in summer 2019.

The company concept was brought to life by architect Joseph Cincotta of LineSync Architecture, in collaboration with Lineberger and their godson, Riley Poor, who lives with tetraplegia (also known as quadriplegia) from a spinal cord injury. “We worked with Riley on making his Portland, Oregon ranch home accessible in 2011,” Lineberger says. A simple dinner conversation about their build together led to the creation of Wheel Pad. Headquartered in Wilmington, Vermont with Poor as a minority owner, WheelPad offers two eco-friendly, bedroom/bathroom combinations models – one at 200-square-feet and another at 260-square-feet (somewhat comparable to the size of a hotel room). 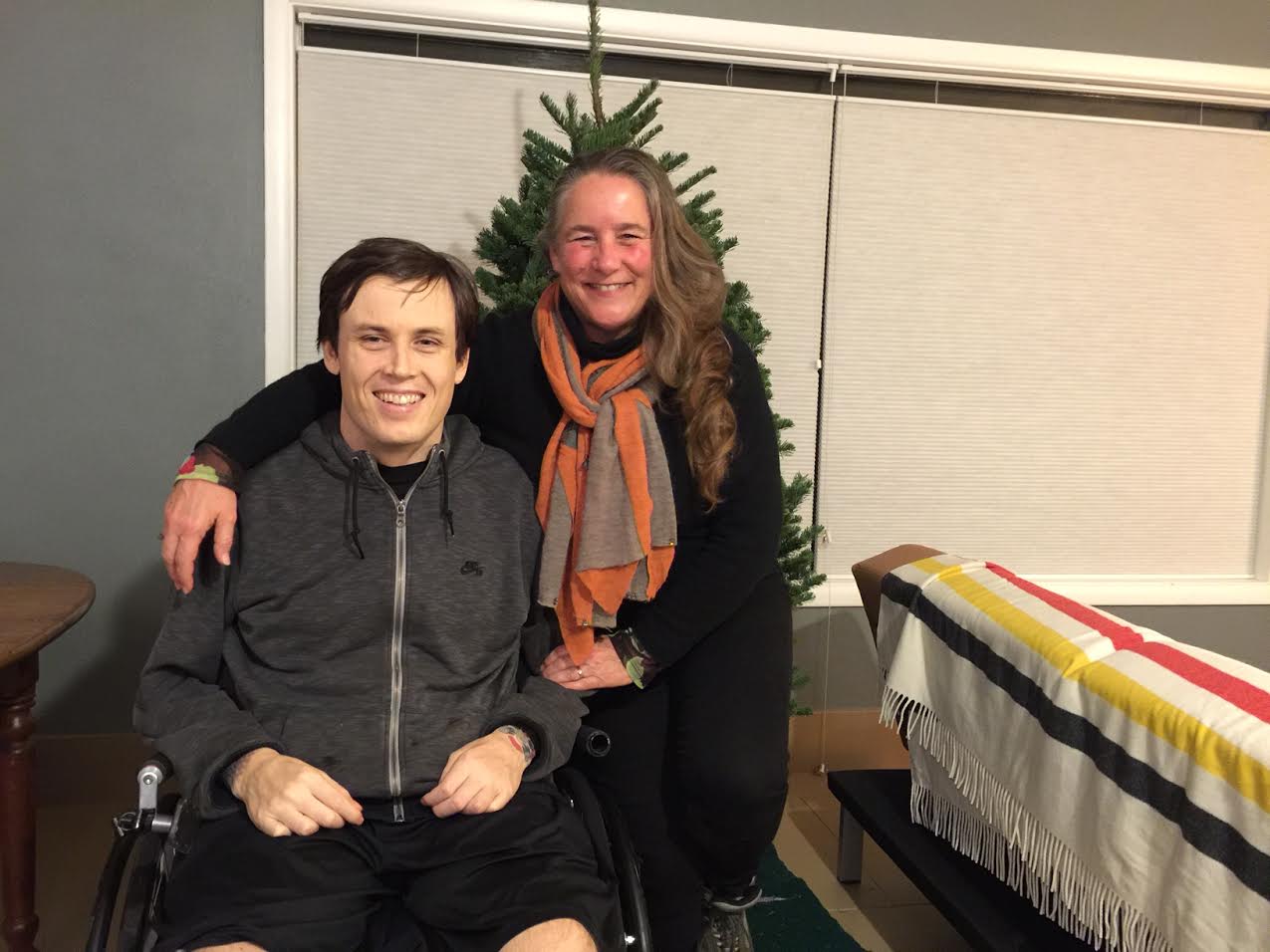 In one form or another, depending on one’s goals, the tiny home movement is about freedom. But can a tiny home offer bigger bang for your buck? According to Census.gov, the average cost of a standard house is nearly $275,000 and, so, owners typically spend a pretty penny on down payments and monthly mortgages; even though, according BankRate.com, the majority of Americans live paycheck to paycheck. Tiny homes cost a fraction of that and, thus, The Tiny Life says that roughly 70 percent of tiny home owners don’t have mortgages. Plus, tiny home owners save even more with decreased monthly utility bills and on maintenance. And, of course, time is saved with less square footage to clean.

Interest goes beyond time and money though. Some are intrigued by the tiny home movement because they’re looking for a new adventure or the ability to be mobile. Others are passionate about decreasing their environmental footprint and, perhaps, living simpler and/or downsizing. And, as with Wheel Pad customers, the movement is attraction to those seeking an affordable space that grants independence within close proximity to family.

Perhaps the biggest benefit of tiny home construction, especially among the disabled community, is the ability to customize, from structural slide-outs for increased space (a feature commonly used in RVs) to ADA-compliant elements. Wheel Pad has incorporated many adjustments to better align with the daily functionality of wheelchair users, such as height of countertops, location of electrical outlets and even the placement of the microwave. “Another feature that is really easy to build into any property, but often overlooked, is bringing the [light] switches down on the wall so someone in a wheelchair can access it,” Poor says in the company’s online video. He also boasts about the independence that comes from his accessible bathroom, thanks to lowered counters, touch faucets and push sink stoppers. “A big game-changer for me was having a sink where I could just roll up underneath [the modified countertop] and brush my own teeth. The first time I pulled up to the sink and brushed my own teeth was the first time I brushed my own teeth in three years. It was pretty amazing to be able to reach my own toothbrush and turn on the water,” he describes.

Cincotta says people assume that special feature customization equates to a higher price tag, but that’s not always the case. “This is not rocket science. It’s just rethinking how we think about building these things,” he says. For example, “We have these pivot hinge doors– just like they have at restaurants – that can swing either way,” he describes of the design solution to eliminate struggling with turning door knobs. This type of door is just a smart choice, not a costly upgrade.

“Wheel Pad is about inclusion,keeping families together. It is about dignity, independence and kindness,”Lineberger suggests. The company customer base is now expanding with an increase in inquiries from seniors. In fact, the demand for tiny homes from a mature demographic seems to be the trend with several companies offering solutions. Senior Planet reported that “some 40 percent of tiny house owners are over age 50,” because this time in life can be ideal to downsize, personalize, simplify and save. Perhaps “Granny pods” are the new mother-in-law suite! For instance, John Louiselle and Jesse Lammi started NextDoor Housing, which rents and sells tiny homes to seniors. Based in Minneapolis, the childhood friends were inspired after watching their own aging grandparents make tough decisions about assisted living and nursing homes far from family. MEDcottage, designed with medical and/or hospital-based needs in mind, also rents units (in select states) as an affordable alternative to nursing homes. And Elder Cottages, based in Pennsylvania, offers one and two-bedroom plans so trimming square footage can be less extreme.‍

Wheel Pad offers detailed information about sizing, permitting, power, plumbing, etc. on the FAQ page of their website. Many tiny home builders (not just specialty companies) are also willing to work with customers on accessibility modifications. Like Seattle Tiny Homes, for example, whose homes are completely personalized to each customer. Disability-friendly features include ADA showers and toilets, grab bars, wider doorways, hospital beds and more. Cornerstone Tiny Homes, based in Orlando, tells AmeriDisability Services that customization options are greater on permanent or stationary models versus units on wheels which are narrower.

In 2015, Wheel Pad incorporated as a L3C business, a hybrid between a for-profit and a non-profit; and, so, foundations are able to donate funds as part of their Program Related Investment. “If a Foundation would like to provide an individual with a Wheel Pad, they can donate to Wheel Pad L3C, and we can then transfer that donation to a Wheel Pad user,” Lineberger explains. Units range from $1,500/month for rental and $60,000 for purchase. And, she says, the VA Specially Adapted Housing grant covers purchase, delivery and installation. Note: Since tiny homes aren’t traditional, neither is their financing. You may be hard pressed to find traditional mortgage lenders and, instead, opt for a RV loan or personal loan, if needed.