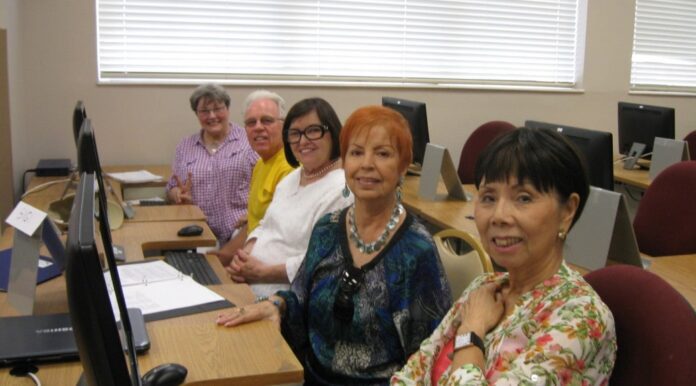 Technology is second nature for younger generations who are accustom to computers, cellular phones, video game consoles and more. For many seniors, however, the ever-changing world of computer-based technology can feel foreign. In May 2017, a Pew Research study revealed significant increases of tech use among older adults, citing that roughly two-thirds of those ages 65 and older go online – a 55 percent increase in just under two decades.

Perhaps the increase of technology adoption among older adults may be attributed, in part, to helpful organizations like Seniors Now Learning Center, a volunteer-run nonprofit offering instructional courses in various computer subjects and more. “We’re an organization of seniors teaching seniors,” described Zed Troth, who serves as the nonprofit’s president. At 52, Zed and his wife, Kim, are the only volunteers technically not yet classified as seniors. Working in the business field of computers, Zed connected with Seniors Now simply wanting to aid others interested in obtaining computer-based knowledge. “I run a full-time business apart from donating 100 hours a month to run the Seniors Now organization,” he explains. And, as senior students can attest, his efforts are making a difference!

“Zed and his wife are very knowledgeable,” says Teri Mahon, a 71-year-old WinterSprings resident. “I’ve [also] gone to classes at the Apple store and I had better experience taking classes with Seniors Now.” Students like Teri respond to the instructional approach of Seniors Now. Held at the Marks Street Senior Center in Orange County, classes are limited to ten students with one instructor and typically an additional two to four coaches (i.e. assistants). “Where we differ is that we’re not just a teacher standing up lecturing to a large class. We employ multiple coaches in addition to the teacher, so it’s unique in that we are somewhat closer to a one-on-one learning experience,” Zed said. Classes are taught at a gentler pace whereas, as with Teri’s experience at Apple, classes taught by other technology companies can feel too advanced or too fast-paced for novice computer users.

Seniors Now assists about 500 students per year with a volunteer staff of five instructors, fifteen coaches and other administrative helpers. The majority of students, says Zed, have never touched a computer and, thus, the three most popular courses are: Introduction to Computers, Exploring Your Computer and Introduction to the iPad. Seniors Now offers twelve classes, ranging from basic use of the internet and email to advanced courses on specific software and online tools. “Once a person learns how to send an email and work the internet, the sky becomes the limit because they can teach themselves [via the internet] from there,” declares Zed. While he acknowledges that computers can feel intimidating to seniors, he reiterates that gaining minimal computer skills can maximize opportunities for one’s passions. For example, access to the internet can help one learn about gardening, sewing, fishing or any other personal hobby.

While computers may be used for hobbies, Teri believes they’ve become a necessity. “I think it’s more of a survival for us as seniors,” she said. “For example, I just went up north and had an airline ticket and, of course, the airline wants you to print it out before you get there. You can’t do things like that if you don’t know how. It’s those kinds of daily encounters ─ and other directives to visit websites [for information] ─ that makes it vital for seniors to stay apprised of technology.” Over the past four years, Teri’s taken three courses with Seniors Now, including Introduction to the iPad. She’s planning to enroll in the Using Your Digital Photos class because, nowadays, she uses her smartphone for photography rather than a camera.

Seniors Now was founded twenty years ago, which directly correlates to the time frame of the Pew Research study. However, while this progress is wonderful, the remaining one-third of adults ages 65 and older surveyed said they never use the internet, with about half saying that broadband services were not even installed at home. But Seniors Now can help! For more information, visit SeniorsNowOrlando.org or call (407) 318-3256.

Photo above: Students of Seniors Now at Mark St.