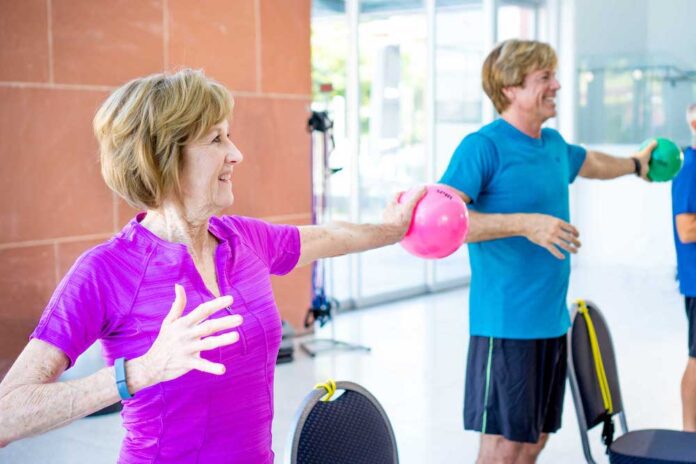 Physical activity is essential to healthy living and, perhaps, especially so for mature adults. It can prevent and/or help control many health problems (including those associated with aging), and also build and maintain strength, endurance, balance, flexibility and mental well-being. According to the Centers for Disease Control and Prevention (CDC), persons who are 65 years of age or older and who are generally fit without limiting conditions should achieve 150 minutes of moderate-intensity aerobic activity (i.e. brisk walking) or 75 minutes of vigorous-intensity aerobic activity (i.e. running) every week, plus muscle-strengthening activities that work all major muscle groups on 2+ days per week. Starting or even sustaining a fitness regime can be intimidating, but a program called SilverSneakers is making exercise more inviting and accessible for seniors.

“SilverSneakers has been the best thing that’s happened to me. Exercise just makes you feel good mentally and physically,” proclaims Leonard O., an 89-year-old who says he has a goal to bench-press 100 pounds when he’s 90! Empowering aging adults to meet their wellness objectives has been the mission of the company since its inception. SilverSneakers was established in 1992 by Mary Swanson and her company, HealthCare Dimensions. She was inspired by her father who survived a heart attack at age 51 and pledged to improve his health through regular physical activity. Mary’s commitment to support his effort expanded into a nationwide endeavor to formalize exercise programs for older adults.

Now operated by the parent company Tivity Health, more than 15.6 million people are eligible for SilverSneakers at no cost through more than 60 health plans, including the nation’s leading Medicare Advantage health plans, Medicare Supplement carriers and group retiree plans. While one’s health is priceless, SilverSneakers prides itself on eliminating gym fees, especially since typical fitness memberships average $30-75 per month. Aside from this out-of-pocket savings, a new study published in Health Behavior and Policy Review “found SilverSneakers group exercise participants saved $2,144 in healthcare costs over a one-year period compared to nonparticipants.”

“You don’t start running a marathon tomorrow. You have to take that first step. And it’s the same thing with SilverSneakers. You need to join and find out what is being offered and take advantage of it,” explains 79-year-old Mark B., who said, “I quit smoking in 1989 at the age of 50, started walking, built up to two miles and then kept going and made a marathon an ultimate goal. And, after the first one, I just kept running more.” He’s since completed 296 marathons and, of course, participates in SilverSneakers sessions!

Despite his age, some would classify Mark as an elite athlete. However, SilverSneakers caters to all fitness levels by offering three categories:

According to SilverSneakers, “people who get fit with their buddies are more likely to stick with their exercise routine than those who go it alone,” and the company found that “49% of active members said they were motivated to continue exercising because they had a friend in the program.” For some members, the intention to improve heart-health also gets the heart pumping in unexpected ways thanks to socialization. As reported in a 2016 DatingAdvice.com article, then 87-year-old Nelson Walter met Mary Swenk in a SilverSneakers class and, just two months later, the pair announced their engagement! Donato Tramuto, CEO of Tivity Health, attests that relationships are among the many benefits, telling AmeriDisability Services, “From physical transformations and overcoming health challenges, to reaching new fitness goals and meeting friends, SilverSneakers helps members improve their health and well-being to live life well.”

SilverSneakers is available at more than 14,000 participating gyms and fitness centers, including 975 in Florida alone. That means that members can access weights, treadmills, pools and other amenities most anywhere, even when traveling. Plus, members can access additional health resources through the SilverSneakers website (silversneakers.com), blog and newsletter.

Share
Facebook
Twitter
WhatsApp
Email
Previous articleThe Stand Up and Play Foundation is Above Par for Adaptive Sports
Next articleGranny Nannies Help with House Calls
Nancy DeVaulthttps://www.ameridisability.com
Nancy is the managing editor of AmeriDisability. She is an award-winning storyteller passionate about health and happiness.