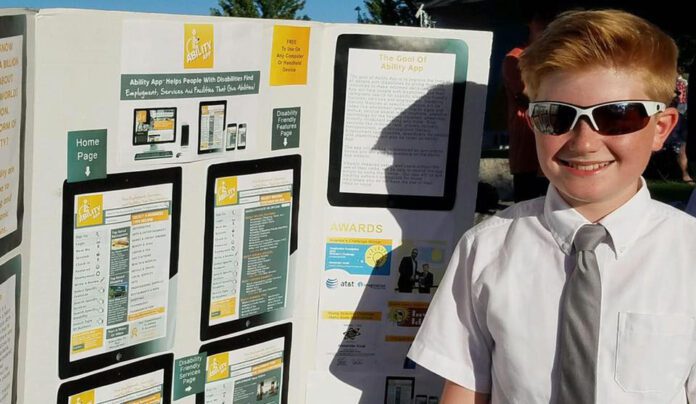 Most teenagers are wired for today’s world of advanced technology, and 13-year-old Alex Knoll is no exception. Well, that’s not exactly accurate because he really is an exceptional person. You see, instead of spending time on typical teen-focused technology like social media platforms and online gaming, the Post Falls, Idaho native is focused on building the framework for an inclusive mobile app. Ability App will “improve the lives of all people with disabilities by giving them the resources to make informed decisions.”

Alex says inspiration came from a complete stranger about four years ago. He saw a man struggling to enter a store. “I felt really bad that there wasn’t an automatic door for him,” recalls Alex, wondering if an app housing accessibility information existed… it didn’t. Alex recognized that, prior to that moment, he hadn’t realized the important needs of people with disabilities ─ and others likely needed an eye-opener too. He immediately took action as an inclusion advocate and began developing Ability App to “help people with disabilities and their caregivers navigate public spaces and find safe, reliable services and employment opportunities.”

Alex submitted his pioneering prototype to Invent Idaho, an innovative competition for students, where he won ‘Best of Show.’ There cognition steadily continued. He won top honors at numerous competitions, including I Cubed, the AT&T and Imagination Foundation Inventor’s Challenge and the Discovery 3M Young Scientist’s Challenge. Plus, community leaders and business executives, like Apple Inc. CEO Tim Cook, also took notice and, as a result, Alex began speaking regularly about his vision at community, economic, education and technology forums both domestically and internationally. “Although many other similar products have sprung up since Alex started his mission with Ability App, there are no all-inclusive global accessibility tools that include information on accessibility-friendly features for people with ALL types of disabilities,” Annie declares of the distinction.

While recognition is priceless, developing Ability App comes with a hefty price tag. During an appearance on the Ellen DeGeneres Show, the funny talk show host, who Alex describes as his “hero,” presented him with serious cash: a $25,000 donation from Shutterfly! Alex also brought in an additional $9,000 through GoFundMe. Still, fundraising remains a challenging priority. “The $300,000 that Alex is trying to raise will help with the development and continuation of Ability App. You can imagine how complex a project like Ability App is… providing a use-friendly interface that can be used by such a diverse group of users,” Annie says. It’s those detailed complexities, however, that will create inclusiveness. For example, the app will offer both voice command and eye-tracking software to better serve users with visual, vocal and limb impairments.

Alex, who is homeschooled, devotes about one to two hours daily to Ability App, and is also partnering with tech experts and volunteers. Hyper giant, for example, is an Austin-based company assisting with developing the apps three phases. “When I met Alex at the Think Big Festival last year, I was so impressed. Not just by his app, but by his drive to use technology to make peoples’ lives better. I know how important it is to have guidance in tech even when you’re an adult, so I wanted to support him in any way I could,” says Marc Boudria, Hypergiant’s VP Artificial Intelligence. Marc says he and his colleague, Matt Murray, act as virtual Chief Technology Officers by offering guidance, advice and support on design, strategy, engineering and business.

The first phase concentrates on crowdsourcing data collection using volunteer Ability Ambassadors. “I have over 600 of them around the world and they are going to help me populate the data for the app, and note what businesses in their area and the places they travel to are accessible,” Alex explains. “Everyone is welcome to become an Ability Ambassador and it is a much needed volunteer group,” encourages Alex’s father, Brian Knoll. These aides will establish and update disability-friendly features of locations, such as wheelchair ramps, braille signs, service animal relief spots, assistive technology for hearing impaired and more. The second phase will emphasize accessible employment; and the third phase will present services and features like grocery delivery, transportation, etc.

Alex says he’s especially learned a lot from one Ability Ambassador, Tara Miller, a family friend who is a paraplegic. “She’s given us a lot of pointers and ideas for the app,” Alex says, like suggesting simple modifications that businesses and public facilities can do. For example, coat hooks in restroom stalls are typically located near the top of the door and, thus, not ideal for wheelchair users. Hooks can easily be repositioned to a lower level for increased accessibility.

“He’s on a mission to do good for others,” says Brian. “It’s been rewarding for Alex to hear from people all over the world talking about how they are inspired by what he is doing and how they hope to do something to make the world a better place too.” And Marc agrees, “With Alex’s ambition, compassion and eye for technology, he has a long future ahead in technology and making a difference in the lives of others.” Once complete, the Ability App will be free to download. In the meantime, visit AbilityApp.org for more information, sign up for progress updates, volunteer as an Ability Ambassador and donate to the effort.