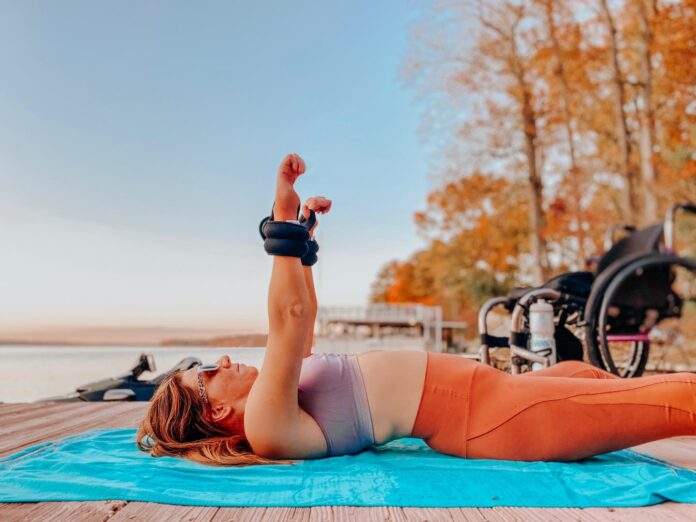 In 2010, just weeks away from walking down the aisle to her husband-to-be, Rachelle Friedman Chapman was playfully pushed into a pool by her friend at her bachelorette party. Her head hit the pool floor, and she suffered a severe spinal cord injury that caused paralysis from the chest down. Rachelle’s well-planned-out future shifted instantly but, through it all, she stunned those around her and the world at-large with her positivity and perseverance.

In the years that followed, Rachelle publicly shared her experience — including her friendship with the woman that unintentionally caused the accident — on many media outlets, including People Magazine, The Today Show and a TLC documentary special.

While her wedding was delayed, Rachelle did marry her sweetheart, Chris, and the two welcomed a daughter, Kaylee, via surrogate. Chronicling their love story and her tested friendship, Rachelle authored, “The Promise: A Tragic Accident, a Paralyzed Bride, and the Power of Love, Loyalty, and Friendship.” Residing outside of Raleigh, North Carolina, Rachelle now advocates for people with disabilities, models and writes about motherhood, fashion, fitness and life as a wheelchair-user on her blog Diary of a Wheel Girl.

AmeriDisability is pleased to share the following work originally published on Diary of a Wheel Girl. Rachelle speaks her truth and declares, “Never feel guilty for having a bad day.”

We’re all looking for inspiration. Something that can give us that kick in the rear we need to meet our goals, be happier, or find meaning in events we just can’t explain. I didn’t ask for the role as a motivator, but it’s something I’ve learned to embrace because I enjoy seeing someone comforted with my words.

As soon as a catastrophic injury like mine happens, people look to you for strength when they see that your life-altering event didn’t totally break you. But I’m not your typical motivator. There are some phrases out there that I think people overuse. People expect me to jump into motivational talks or use my life story to comfort someone I just met who has a new injury. But I don’t spew your typical cliché advice. Here are some words of encouragement and comfort you’ll never hear from me.

1) What doesn’t kill you makes you stronger.

I love the sentiment because many challenges we face do in fact make us stronger. But this quote generalizes all of life’s troubles, implying that no matter the severity of an event you’ve experienced, you’re sure to gain strength. If I were giving advice to someone who just broke up with an overbearing boyfriend, I might agree that a woman could gain confidence and strength from it even if she felt like she couldn’t go on. Would I say this to someone who has been raped and abused their whole life? Probably not. I think we can use our strength in spite of a traumatizing experience though.

2) The only disability in life is a bad attitude.

As someone with a disability, I think I’m supposed to be regularly posting selfies of me doing something independently with this quote underneath the picture. But the truth is, there are disabilities that keep me and many others from doing so many things regardless of how awesome our attitude is. To me this quote is saying, “Hey, if you’re upset about having a disability, then you have a crappy attitude.” Can’t I be positive and happy but still be fully aware that my disability holds me back sometimes?

3) Everything happens for a reason.

I think people desperately want an answer for why something terrible has happened in their lives so they can more easily come to terms with it. But I refuse to believe any higher power has this plan for who gets attacked, violated, murdered or paralyzed for the good of humanity. If this were the case then you couldn’t hate criminals who may have wreaked havoc on someone’s life. They are just carrying out history that’s already been written right? I don’t think so. It’s OK to hate a tragic event and wish that it had never happened.

There are people out there who have dedicated their lives to achieve a specific goal. But unfortunately, it’s not uncommon for a bunch of motivated people to be working towards the same goal, leaving many with crushed dreams. Do I think those who lose out just didn’t try hard enough? Not at all. And no I don’t think it’s because “it wasn’t meant to be.”

5) God doesn’t give you anything you can’t handle.

I don’t believe God is the cause of pain, hate, and sadness. I’m not sure what’s out there, but if there is a higher power, I’d like to think he is mourning our tragedies with us and not brushing his hands off after completing some preplanned devastation. And there are people who can’t handle it. That’s why they’ve either checked out mentally or physically. And I wouldn’t encourage them by saying this awful event is your prize in life for being a strong person.

6) Instead of having a bad day, be thankful you have the day.

You can be thankful and still have a totally awful day. I think this quote is a guilt trip in a pretty package. If you’re upset and want this horrible day to end, it doesn’t mean you aren’t grateful. Never feel guilty for having a bad day. We are all allowed to have them.

Of course this is just my opinion, but ultimately saying these kinds of things only minimizes painful events and often leaves the real problem glossed over. A horrific experience doesn’t always make you stronger, I don’t think God intentionally dealt you a bad hand and it’s OK if you feel like you can’t handle it. You have the power and you have choices. When you feel sad, scream into your pillow if you need to, cry your eyes out, but most importantly, realize that you never deserved to feel this pain. Do what you can to heal and move on.

Here’s a quote for you: “Life is like a game of cards. The hand you are dealt is determinism; the way you play it is free will.” – Jawaharlal Nehru