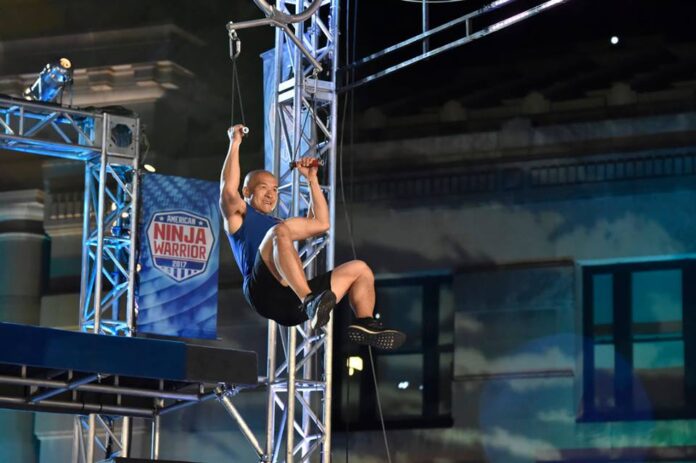 Jimmy Choi was diagnosed with Parkinson’s disease in 2003 at the age of 27. “The doctors told me that I would have about 15 good working years left, and that I should do whatever I could to prepare for my future,” he tells AmeriDisability Services. Well, now at that cautioned 15-year mark, Choi, a husband and father of two, continues to thrive both professionally, as a chief technology officer, and personally, as a marathoner and contestant on American Ninja Warrior (the NBC television program that challenges competitors to tackle physically demanding obstacle courses).

Parkinson’s disease is a central nervous system disorder affecting movement. According to Florida Hospital, Parkinson’s affects up to one million people in the U.S., including 20,000 in Central Florida alone, totaling more people than Lou Gehrig’s disease (ALS), muscular dystrophy and multiple sclerosis combined. When Choi’s symptoms first presented, including tremors, rigidity, fatigue and loss of balance, he attributed them to ordinary causes like work-related stress, exercise-induced soreness and general clumsiness. “Initially, I was so young. Parkinson’s is not the first thing you think of when you start experiencing health issues,” he explains. Even after receiving the diagnosis and relying on a walking cane, Choi remained in disbelief… until the day he defines as his “rock bottom.” He fell down the stairs in his home while holding his infant son in his arms. After seven years of denial, it was an overdue wake-up call to take control of his health.

To aid research, Choi began volunteering for Parkinson’s-focused clinical trials. He noticed physical activity was a vital component among all the trials. “For Parkinson’s, there things you must do,” proclaims Marti Miller, president of the Parkinson Association of Central Florida and caregiver to her husband, David, who has Parkinson’s. She says, “Educate yourself about the disease, take your medication (and on time), exercise, eat properly and socialize in order to live a long life with this disease.” These lifestyle changes were gradual for Choi ─but they worked! “I started walking around the block once with my family using my cane and, eventually, was stronger and more confident to go twice. Then, I could go without the cane. Every day I worked to build muscle memory and believe I was building neuropathways in my brain,” Choi says.

He found joy pushing his boundaries with a daily exercise routine. Over several years, Choi rebuilt strength and stamina, and excelled at three high-performance sports: running, cycling and obstacle course training with crossfit and calisthenics. Aside from the physical aspect, Choi explains that mental effort is a factor because his body requires modifications. “I drag my right leg, so I mentally tell myself to pull my knees up toward my chest and pick up my leg,” he says. When cycling, Choi favors his left side because of muscular tremors on his right. Last year, the now 42-year-old opened up to TV viewers about his physical limitations and consequential adjustments during his America Ninja Warrior appearance. He felt compelled to challenge himself, but to also compete on behalf of the Michael J. Fox Foundation to increase Parkinson’s awareness. “I said that taking that first step was the hardest thing anybody can do, but the rest of it then comes more easily,” he recalls of the taping. His obstacle run didn’t go as he hoped. However, American Ninja Warrior invited him to return for a second attempt (to air summer 2018), and Choi offered a new inspirational message: “Once you’ve taken that first step, it’s going to be hard and you might fall down… but you get backup and do it all over again!”

Now as an advocate, Choi empowers others with the disease. “We need to give our bodies a better chance of performing. It doesn’t matter what you’re faced with…if you make your body healthier, you are going to feel better,” he declares. In the spring, alongside physicians and researchers, Choi spoke at The Brain and Beyond Conference in Orlando, hosted by Florida Hospital and the Parkinson Association of Central Florida. “A conference like this gives young-onset or nearly diagnosed individuals access to people, networks and information,” says Choi. More than 500 patients and caregivers learned about the latest trends in managing symptoms and improving quality of life.

“Education is power and it is our goal to provide as much education to the community as we can,” says Anissa Mitchell, Parkinson’s outreach program manager at Florida Hospital. “Medication and surgical management of symptoms is just one way to battle Parkinson’s. Exercise is key to managing the disease as well. Jimmy is a prime example of how much exercise can benefit someone with Parkinson’s and he also proves that, despite starting years after the diagnosis, he was able to regain strength and physical fitness. You can fight back,” she affirms. At the conference, the Parkinson Association of Central Florida donated $250,000 to Florida Hospital to impact patients. Mitchell says the funds will develop a comprehensive movement disorder program within the Florida Hospital system complete with fellowship-trained movement disorder neurologists, mid-level practitioners (such as nurse practitioners or physician assistants), physical/occupational/speech therapists, social workers, neuropsychology/psychiatry experts and nutritional counselors.

Choi also honestly shares how Parkinson’s affects more than visible mobility skills, but understands that many solely associate the disease with tremors. “For example, your executive function in the brain starts to slow down. You lose your sense of smell, cholesterol levels drop and blood pressure lowers because anything that’s a muscle – and your heart is a muscle – can be affected by Parkinson’s. You can experience constipation because the intestines aren’t pushing normal,” Choi explains. “Parkinson’s is a complex disease,” Mitchell adds. “It’s not just about movement; it also impacts mood and emotions and, often, treatments only focus on movement problems. We are seeking to improve care in Central Florida so that it is more holistic and treats the whole person, including care partners because we know they are affected as well.”

Patients and caregivers can stay up-to-date on research and more at ParkinsonsNewsToday.com. For more information, visit ParkinsonCF.org and FloridaHospital.com/Parkinsons-Disease-pd.

Share
Facebook
Twitter
WhatsApp
Email
Previous articleMuseum of disAbility History: An Inclusive Space of the Past, Present and Future
Next articleFormer Florida Senator Continues to Impact Education for Students with Unique Abilities
Nancy DeVaulthttps://www.ameridisability.com
Nancy is the managing editor of AmeriDisability. She is an award-winning storyteller passionate about health and happiness.