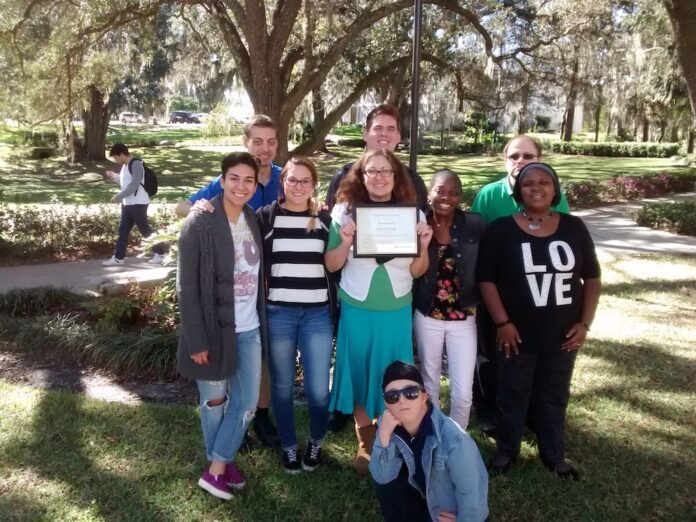 The disability-related efforts spearheaded by Former Senator Andy Gardiner continue to impact families well beyond his term. When he was sworn in as president of the Florida Senate, a position he held from 2014 to 2016, Gardiner publicly addressed his son Andrew, who has Down syndrome: “There isn’t a day that goes by when I don’t think about what we can do in this Legislature to help you and others. I love you son, and I’m so proud that you’re my son.” Among other priorities, his term focused on a “Cradle to Career Pathway to Economic Independence for People with Unique Abilities.”

Andrew, now 14, loves to play basketball and ride his bike. And, thanks to his father (and mother Camille, who co-founded the Down Syndrome Foundation of Florida), Andrew and other children with special needs have access to educational opportunities that were once unavailable.

In 2013, Gardiner sponsored the Exceptional Student Education Bill which eliminated the special diploma because, generally, neither colleges nor employers recognized the degree. The bill’s passing defined inclusive education (including integration in typical classrooms) across school districts and allowed students with varying abilities to work toward a regular high school diploma. “These kids need to be on a similar track like every other child and to have the best opportunity to succeed,” Gardiner tells AmeriDisability Services.

Gardiner says he worked to empower parents by creating choices; as with The Gardiner Scholarship Program which allows parents to personalize the education of their children (PreK-12) by directing money toward a combination of services and approved providers. In 2014, Florida became the second state in the nation, after Arizona, to create an ‘education savings account’ program for children with special needs. “Think of it as a bank account that allows parents to build an ‘a-la-carte’ education for their child,” explains Patrick Gibbons, public affairs manager for Step Up For Students, a scholarship-funding organization that oversees the Gardiner Scholarship Program.

“Senator Gardiner and his wife Camille have been tireless advocates for children with unique abilities and needs. We are proud to manage a scholarship program that bears his family name and we are grateful for their continued support,” says Doug Tuthill, president of Step Up For Students. In 2016, to his surprise, the Legislature renamed the program in recognition of Gardiner and his family – something he describes as a humbling honor.

According to Gibbons, eligible students must either receive a home education or attend a private school, as other state payments are available for students attending free public charter schools and public district schools. The average full scholarship is approximately $10,000 per student, and renewal is required each year. The state appropriated $101.2 million for the 2017-18 school year and, as a result, Step Up For Students granted 9,612 scholarships and AAA Scholarships gave another 644. For 2018-19, the Legislature appropriated $124.6 million.

As outlined on the Florida Department of Education’s website, “Scholarships can be used for specialized services such as speech or occupational therapy, instructional materials, tuition at an eligible private school, contributions to a college prepaid account and more.” Malachi Kuhn, born with spina bifida, used the scholarship to pay for private school tuition in Ruskin, as well as after-school physical, occupational and behavioral therapy; and Abby and Christopher Alexander, Spring Hill siblings both on the autism spectrum, receive home education and services through scholarship funding.

The Florida Center for Students with Unique Abilities

Also in 2016, the Florida Postsecondary Comprehensive Transition Program Act established the Florida Center for Students with Unique Abilities (FCSUA). Located at the University of Central Florida, Gardiner describes it as a clearinghouse for college programs for individuals with intellectual disabilities.

“It’s the only legislation like this in the country. No other state has the resources available to help start these programs like we have in Florida,” said Dr. Paula Kohler, executive director of the Florida Center for Students with Unique Abilities. The legislation charged FCSUA with establishing (1) an institution application progress, (2) grant award development to aid approved institutions, and (3) scholarship program for incoming students. The FCSUA team works with universities, state and community colleges, career tech centers and beyond to establish programs, such as the Inclusive Education Services at UCF. FCSUA is already assisting eight approved programs and, according to Kohler, several other applications are pending. “We do workshops, webinars, site visits and provide resources. We try to help people think about what a program would look like at their institution and make sure they meet legislation requirements,” says Kohler; adding, “My vision is that we create lots of programs around the state so students and families can make choices based on their wants and needs.”

Presently, 83 students receive FCSUA scholarships around the state. Both Gardiner and Kohler are hopeful that other states will follow with similar legislation to benefit institutions and students. Kohler says she’s encouraging colleagues in other states through the National Technical Assistance Center on Transition and the U.S. Department of Education.

Gardiner is humble about his impact and has said he was simply a father in a position to “occasionally get things done.” Yet politicians and families alike regard Gardiner as an important change-maker. Kohler explains that his ability to recognize needs and solutions proved to be effective. “He had the vision and understanding to make it work, but also the leadership to see it all through. It wasn’t an easy task but he was able to engage the Senate, the House and, ultimately, the Governor to get legislation passed,” she says.

Gardiner hopes the Legislature and next Governor will continue to empower parents by expanding funding. “I think there will be justification for it. You are going have more kids that are better prepared because of the scholarships and have more opportunities because of the special diploma going away. These programs are going to need to grow in my opinion,” he says.

In addition to the Gardiner Scholarship and FCSUA, Gardiner supported other initiatives as part of his Cradle to Career Pathway to Economic Independence for People with Unique Abilities. For example, the Florida Unique Abilities Partner Program which recognizes businesses that employs individuals with disabilities and establishes a financial literacy program. There are currently 125 public and private entities registered as Unique Ability Partners, such as AT&T, Holiday Inn Express, McAllister’s Deli, Dollar Tree and Family Dollar. Others acts included the Florida’s Employment First Act, focused on improving work opportunities for people with disabilities and training human resource personnel on strategies to retain employees with disabilities; and the Achieving a Better Life Experience, geared to help individuals with disabilities save funds for future services and care.

Gardiner served in both the House of Representatives (2000-2008) and the Florida Senate (2008-2016). He currently serves as the Vice President of External Affairs and Community Relations at Orlando Health. He and his wife Camille are parents to Andrew, Jr., Joanna Lynn and Kathryn Lucille.

Share
Facebook
Twitter
WhatsApp
Email
Previous articleAmerican Ninja Warrior Contestant Jimmy Choi Inspires Others with Parkinson’s Disease
Next articleMeet Isabella Matos: An Adaptive Athlete Paving the Way on the Right Track
Nancy DeVaulthttps://www.ameridisability.com
Nancy is the managing editor of AmeriDisability. She is an award-winning storyteller passionate about health and happiness.