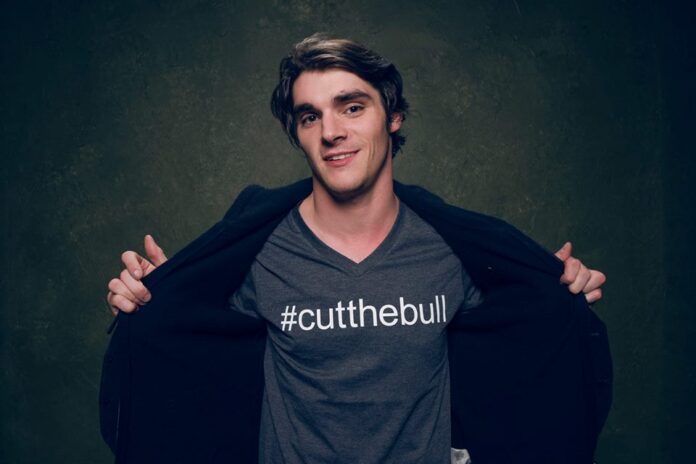 Like many, I binge-watched ‘Breaking Bad’ on Netflix. A plotline inclusive of drugs and violence, AMC’s critically-acclaimed and award-winning drama was a departure from my usual entertainment. However, the writing was intriguing and the acting was impeccable, including that of RJ Mitte who portrayed Walter White, Jr., the son of a chemistry teacher diagnosed with cancer that turns to manufacturing methamphetamine to heighten his family’s financial future. Yes, he’s proud of that project and his other acting gigs, yet RJ, who has cerebral palsy, says he’s most fulfilled by another role: advocate for people with disabilities.

In 2006, then teenager RJ (full name Roy Frank Mitte III) relocated to Hollywood. His younger sister was pursuing acting and, so, to meet kids his own age in his new city, RJ signed up for acting classes too. His break came much faster than most actors! In less than a year’s time, he landed the role of Walter Jr., a teenager with “dark hair, big eyebrows and cerebral palsy.”

“About 20 percent of people have disabilities, but only about1 percent of speaking parts in television portray disability,” RJ shared in a Pittsburg Post-Gazette interview, adding that, “When a person with disability is featured, it’s usually a stereotype − the angry person, the victim or the helpless person who becomes a hero.” Yet, that’s not how he felt about himself (or others with disabilities), nor how he wanted to depict characters on screen.

At three years old, RJ was diagnosed with cerebral palsy, a motor disability that affects a person’s ability to move and maintain balance and posture. Walter Jr.’s condition was more severe than his own, so RJ “regressed.” “The crutches really sold playing the disability because that’s what people fixated on,” RJ explained to AmeriDisability Services. Years prior, RJ was a severe “toe walker” but, with extensive therapy and leg casting, he stopped using crutches. Still, his disability remained influential.  “I allow my CP to help me create characters. The joy, the pain, the knowledge ─ I use that,” he told Evening Standard.

He quickly learned a lot about the acting business, including its equality hurdles. As a spokesman for I AM PWD (Inclusion in the Arts and Media of Performers With Disabilities), a campaign associated with the Screen Actors Guild, American Federation of Television and Radio Artists and Actors’ Equity Association, RJ strives to improve industry access, inclusion and portrayal accuracy for all. In fact, he wants actors with disabilities to book auditions for non-disabled roles. And why not? On the flip side, people without disabilities perform disabled roles.

“People are hungry for realism. People are hungry to see characters like them,” RJ declared in a Vice video. He admitted to AmeriDisability Services that an industry change has begun but the reasoning may not be what he’s worked for. “I do see a shift for inclusiveness, but I also see a shift because it’s lucrative,” he offered. That’s why RJ is compelled to remain vocal for necessary change. “Advocacy is really what I’ve been doing for the last couple of years since Breaking Bad,” RJ shared. “I’ve actually been doing advocacy since before I was an actor.” That’s something he credits to his parents.

Aside from advocating within his own business field, RJ supports work equality overall. He’s lobbied Congress and served as a spokesperson for disability rights, women’s rights and fair wage. In the Nov/Dec 2017 issue of AmeriDisability Services, RJ was featured in the What Can You Do? advertisement, a message from The Campaign for Disability Employment to promote positive employment outcomes for people with disabilities. “People look at disabilities as liabilities. The issue is showing people that this is not true. It is so important to show that everyone has talent, and being able to use those talents properly,” RJ explains.

RJ enjoys working with children, such as youth actors with disabilities and various youth initiatives. For example, “I co-founded #CutTheBull with Shriners Hospital and helped to create the content,” RJ said. One-in-four students in the United States report being bullied and those numbers can be two to three times higher for kids with disabilities, according to the National Center for Education. The #CutTheBull campaign empowers people to (1) Respect: Let us look beyond our differences and overcome our fears to #SeeTheAbility in everyone; (2) Reach Out: Talk to, include and get to know someone who is being treated differently; (3) Respond: If you see someone being put-down or teased, do not participate. Instead, show support for the person and tell an adult.

“It’s about being aware, knowing your surroundings, knowing the people around you and, when needed, cutting the bull out,” describes RJ, who drew from personal experience. He believes that the matter is not isolated to youth. “We have bullying in so many facets of our life, but we can cut it out…stop it,” he affirms.

RJ supports numerous causes and nonprofits, and involvement with United Cerebral Palsy (UCP), an organization that educates, advocates and provides support services for people with a spectrum of disabilities, was a natural match. Since 2011, RJ has worked with both the national association and local affiliates as a mission-based ambassador. “He is a role model for other people with cerebral palsy and other disabilities and a reminder that they can lead a life without limits,” says Dr. Ilene Wilkins, President/CEO for UCP of Central Florida, the Orlando-based nonprofit school and therapy center empowering children with and without disabilities to achieve their potential. RJ returns to UCP of Central Florida on April 7, 2018 to co-host the annual Evening at the Palace Gala alongside actresses Cheryl Hines and Rachael Harris.

“I really enjoy the UCP family! It’s amazing to see big advocates in the community that come together to make change. And really that’s what we need, beyond the event itself, is the daily effort of making change,” says RJ, which is achieved through UCP of Central Florida’s innovative and inclusive environment.

RJ has enjoyed many other career-high points. He executive produced a documentary, appeared in music videos, modeled for Gap, walked the runway for designer Vivienne Westwood and served as a correspondent for the 2016 Rio Paralympic Games.

He has three films slated for release this year! “I am passionate about acting because I get to portray different characters and bring different roles to life that I feel are important to share with the public,” RJ attests. Plus, he’s auditioning, developing projects and focused on philanthropy. He encourages people to follow their passions because, like him, you never know when your big break will come. He simply proposes, “It’s [about] finding what makes you happy… and sticking with it!”

Share
Facebook
Twitter
WhatsApp
Email
Previous articleMeet Ollie: A Real-Life Superhero Who Inspired a Pioneering Comic
Next articleTune into the Benefits of Music Therapy
Nancy DeVaulthttps://www.ameridisability.com
Nancy is the managing editor of AmeriDisability. She is an award-winning storyteller passionate about health and happiness.