Please ensure Javascript is enabled for purposes of website accessibility Cervical Cancer Remains a Risk for All, Including Seniors - The Latest National Disability News

Cervical Cancer Remains a Risk for All, Including Seniors 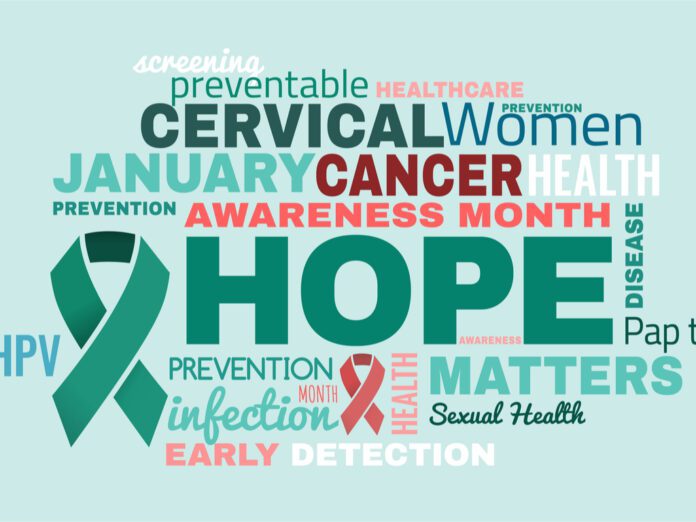 Distinctive colors have been prominent over the past few months: Pink in support of breast cancer awareness (October); orange, cranberry and brown associated with Thanksgiving and autumn (November); and, of course, the classic combinations of red and green for Christmas and blue and white for Hanukkah (December). Color correlations continue in this new month of January with symbolic teal. What’s the deal with teal? It represents Cervical Health Awareness Month, aimed to emphasize prevention, early detection and treatment of cervical cancer and HPV.

According to the American Cancer Society, in 2018, about 13,240 new cases of invasive cervical cancer were diagnosed and about 4,170 women died from the disease. Plus, cervical pre-cancers are diagnosed far more often than invasive cases. Cervical cancer was once one of the most common causes of cancer death among American women; but, thankfully, diagnostic screenings have helped to decrease fatal outcomes. Still, threat remains and, to the surprise of many, risk spans across virtually every demographic including seniors. Nearly all cases of cervical cancer are caused by the human papillomavirus (known as HPV), a sexually transmitted infection that currently about 79 million Americans have. That’s a staggering statistic! It’s so common that more than 90% and 80%, respectively, of sexually active men and women will be infected with HPV at some point in their lives, according to the National Cancer Institute. That’s why the Centers for Disease Control recommends regular screenings for women — like the Pap smear and, when needed, an additional HPV test — and the HPV vaccination for both genders at age 11-12 (which can be administered up to age 26). Unfortunately, there presently is no test for men so HPV is often unknowingly spread to partners.

Signs of advanced cervical cancer may include abnormal bleeding or discharge from the vagina. Risk of cervical cancer is increased by: smoking, having a weakened immune system, long-term use of birth control pills, having birthed three or more children and having several sexual partners.

National data shows that more than 15% of cervical cancer incidences are found in women over 65, and the percentage is even greater in Florida. Nick Van Der Linden, Interim Communications Director for the Florida Department of Health, shared that, in 2015 (the most current report), women age 65 and older accounted for 20.5% of cervical cancer diagnoses in the state.

This may be because some aging women assume that they no longer need a Pap test. And, perhaps because pregnancy prevention is no longer necessary among seniors, many forgo proper safe sex precautions and, thus, increase risk of HPV and other STDs. Furthermore, as a result of bypassing gynecological screenings and thus delayed diagnosis, cervical cancer death rates are higher among seniors.

Beyond childbearing age, continue to practice safe sex to prevent STDs including HPV; plus, talk to your doctor about screenings. For individuals who need assistance covering the cost of testing, explore the CDC’s National Breast and Cervical Cancer Early Detection Program (NBCCEDP), which provides low-income, uninsured and underserved women access to timely breast and cervical cancer screening and diagnostic services.

Share
Facebook
Twitter
WhatsApp
Email
Previous articleThe nonPareil Institute is Serving Adults with Autism
Next articleExercise and Disability: Resources for Accessible Gym Equipment
Nancy DeVaulthttps://www.ameridisability.com
Nancy is the managing editor of AmeriDisability. She is an award-winning storyteller passionate about health and happiness.

Is Your Workplace as Inclusive as These Top Inclusive Employers?