Dolls with Disabilities Play Up Uniqueness

Kids love playing with heroic toys, like firemen, astronauts and superheroes galore. While these characters certainly ignite imagination and joy, they can fail to showcase disabilities. All children should have access to toys that celebrate differences and, well, even resemble themselves. “Toys represent an important part of being a child. It’s something they can often identify with and fosters growth, helping to build self-confidence. When a character with a disability is part of the conversation, it leads to normalizing inclusion of diversity, better understanding and acceptance of all people in general,” suggests Nick Sabula, Public Affairs Specialist for the National Council on Disability. In recent years, some manufactures have introduced inclusive toys… but there’s plenty of room for improvement.

American Girl was among the first toy brands to integrate disabilities. “We’ve been creating products for girls in special circumstances since we introduced our wheelchair for dolls in 1996. We’ve had various stories and books that have included girls with disabilities and girls dealing with unique circumstances,” says Stephanie Spanos, Senior Public Relations Manager for American Girl. The company has since introduced items like crutches, hearing aids, leg braces, service dogs, a diabetes kit (with insulin pumps, pens, glucose tablets and blood sugar monitor) and allergy-free lunch sets, in addition to dolls without hair in honor for those battling with cancer.

For parents seeking look-a-like options that better align with their child’s uniqueness, independent toy makers offer solutions, such as Kayla Baker, owner of Little Plain Jane, an online store for customized, handmade dolls. “My 4-year-old daughter was the reason I first opened an Etsy shop and then started making dolls. She has autism and loves plush toys so, instead of buying her plastic baby dolls, I started making her plush dolls to snuggle,” Baker explains. One mother placed an order for a doll with a birthmark to resemble her daughter; Baker delivered. Soon after, similar requests flooded in and Baker found an unexpected niche. “I’ve created whatever moms have asked me to make and look forward to these opportunities,” she says. Baker has produced dolls with various birthmarks/hemangiomas, scars, eye patches, shortened and/or varied sized limbs and heterochromia (different colored eyes). Andrea Davis was thrilled to find Little Plain Jane and tailor a doll for her daughter, Bria. “We got the doll because we choose to give her laser treatments for her birthmark for medical reasons, and we want her to always remember what her mark looked like. Her birthmark is her, it makes her who she is, and we don’t want her or anyone else to forget that,” Davis explains.

My Little Pony: Friendship Is Magic, a cartoon celebrating how the positive power of friendship can help one combat life’s challenges, and its figurines inspire people of all ages, says Matthew Palumbo, a self-described ‘brony’ who has a degenerative eye disease. “Brony is a title for those who embrace the show that are out of the typical target demographic. It was because of the show – and fan animations –that I was able to cope with the fact that I was going to lose all of my eyesight and go totally blind,” he says, adding that it’s helped his son cope too. Palumbo says My Little Pony subtly embraces disabilities, as with Scootaloo, who has shorter wings and does not fly, and Muffins (also known as Ditzy Doo and Derpy Hooves), who is cross-eyed. In 2014, a character named Stellar Eclipse appeared in the Trade Ya! episode using a wheelchair-like cart. The pony was designed with the Make-A-Wish Foundation by Sylvain-Nicholas LeVasseur-Portelance, who has spinal muscular atrophy type III.

Palumbo also credits fans for creating characters with special needs. “Fans of all abilities like to write, do art, make music, etc. And I am someone in the arts and not being judged,” he says. For example, Snowdrop, a blind pony, is a fan-made animated short by Silly Filly Studios and written by Meredith Sims; however, it’s not officially associated with Hasbro, the manufacturer of My Little Pony. [The Hasbro website promotes “making play accessible,” including its involvement with The Autism Project, but the company did not respond to AmeriDisability Services’ inquiries.] “The disability isn’t made the core point of the story. You only hear that Snowdrop is blind once. It’s really about what a supportive mother can do for their child and that the disability is not defining,” Palumbo describes. He’s hosted “Coping with Disabilities through Pony” panels at BronyCon, an annual convention for My Little Pony fans. “I held four sessions at BronyCon to bring about how the show unites us all. It doesn’t matter if you are blind, deaf, on spectrum, etc.,” he says. “We’re brought together by the show because it gives us inspiration and makes us feel a part of a community. I share messages that relate to acceptance, understanding and empowerment.”

The fact that individuals, versus big companies, offer solutions is somewhat frustrating to many, like journalist and creative consultant Rebecca Atkinson. She noticed the inclusivity gap and, so, in 2015, she and other parents launched #ToyLikeMe to “call on the global toy industry to start representing the 150 million disabled children worldwide.” The campaign went viral reaching over 40,000 followers on Facebook. While #ToyLikeMe does not manufacture toys, they do “makeover” existing mainstream toys with “diff:abilities” which demonstrates how simple inclusion could be for toymakers. The website, ToyLikeMe.org, also shares a listing of “stereotype-busting toys,” like wheelchair-using figures by Lego and Playmobil. “Our biggest success to date is the creation of the Lottie Mia doll with a cochlear implant. This product carries our endorsement and we are very proud of her,” Atkinson says. In 2017, Lottie became the first toy brand to officially back the #ToyLikeMe campaign.

Other attempts have come and gone. Makies, a British toy company founded in 2012 which later applauded #ToyLikeMe, allowed kids to customize 3D-printed dolls, from personal traits (like hair types) to disability features and accessories (like birthmarks and a walking stick). In February 2017, Makies announced its closure on social media and, while reports speculated the company was acquired by Disney, the line has yet to re-launch. Mattel, perhaps the most popular doll creator, once produced Becky, a Barbie friend with a wheelchair. Sales were initially promising until consumers discovered the wheelchair didn’t fit into Barbie’s Dream House; sadly, Mattel discontinued the Becky doll. Sabula says, however, there have been inclusive improvements but more so in other entertainment mediums versus tangible toys. “If you look at many of today’s superhero and pop culture characters, especially from blockbuster movies, many of them have some form of disability. To name just a few: Professor Xavier of X-Men uses a wheelchair, Marvel’s Doctor Strange has impairments in his hands and, a few years ago, Sesame Street introduced Julia, representing a 4-year-old girl on the autism spectrum,” he says. One out of every five people has a disability in the U.S., according to the Centers for Disease Control and Prevention, thus, Sabula declares, “Consumer markets definitely exist for more products featuring characters with disabilities, but it’s up to the industry to assess and respond to such markets.”

Photo credits: Preview and photo above courtesy of American Doll 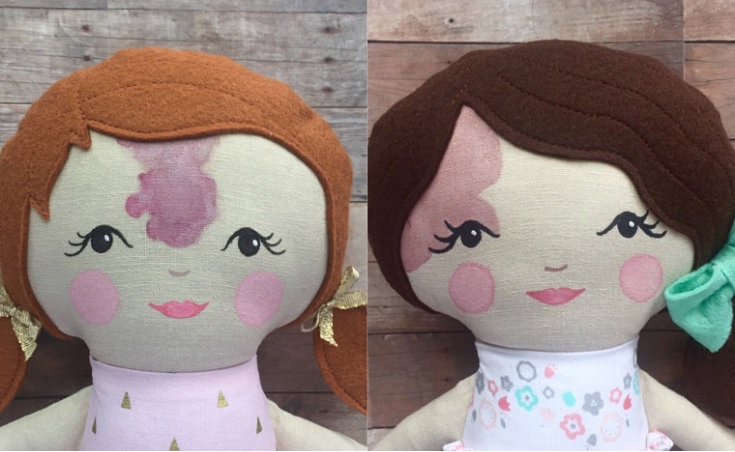 Share
Facebook
Twitter
WhatsApp
Email
Previous articleExperts Weigh In: Lessons on Self-Advocacy & Personalized Learning
Next articleAngela Rockwood: A Beautiful Role Model
Nancy DeVaulthttps://www.ameridisability.com
Nancy is the managing editor of AmeriDisability. She is an award-winning storyteller passionate about health and happiness.