Mobile Voting Could Make Voting Easier for People with Disabilities 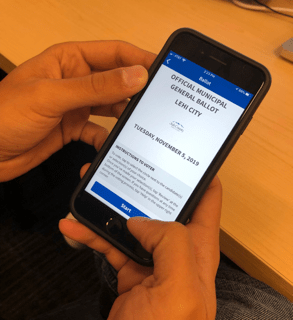 For some voters with disabilities, the voting process can be challenging. For example, those with mobility issues may struggle to access polling sites, those with autism spectrum disorder may feel overstimulated at polling sites and those with impaired vision may feel that privacy is compromised when asking for assistance at polling sites. A new voting option developed by Tusk Philanthropies (TP) may help solve all of these issues and more.

“We have an effort through the Philanthropies to make it easier for people to vote but we wanted to start with specific groups that could really benefit from this technology,” Sheila Nix, President of Tusk Philanthropies, told AmeriDisability.

“The thing that is great about Utah County is that election officials there are trying something new. Sometimes it just takes one jurisdiction to try the new thing and show that it works, and then others are interested in doing it. So we’re really happy that they saw the benefit and were looking out for their voters with disabilities to have an easier way to vote,” Nix said.

The NCC election audit for Utah County’s August municipal primary election showed that votes cast over the blockchain were recorded and tabulated accurately. The audit was for NCC and members of the public to conduct an independent, third-party audit of the Voatz election results. NCC worked with Voatz to develop a web-based tool that displays the voter-verified receipt, the tabulated ballot image and the blockchain transaction.

Utah County invited members of the public to participate in the auditing process and hosted more than ten volunteers from a diverse set of backgrounds. These community members used their expertise and knowledge to verify the election and offer feedback on the technology used in the primary elections. After completing the audit process, none of the auditors flagged the integrity of the election, nor suggested any errors in the submitted ballots or tabulation data. Given the success of the August pilot, Utah County decided to extend the pilot for the general elections in November 2019 and expand the option to voters with disabilities.

“This is the first election where we are expanding mobile voting for the disability community and providing them the option to vote from their mobile device,” said Bradley Tusk, founder and CEO of Tusk Philanthropies. “We are making voting accessible to new communities, increasing voter turnout, conducting new pilots and auditing that each election to ensure that votes cast over the blockchain are recorded accurately.”

“We commend election officials, like those in Utah County, who are providing options to voters with diverse needs with this exciting pilot project. We regularly hear from voters with disabilities who need accommodations in order to vote privately and independently that they value their civic right and duty to vote,” said Sherri Newton, Voting Advocate at the Disability Law Center. “However, the barriers involved with traveling to a polling place make it difficult to vote, which can require them to miss work or can be a threat to their health and safety. These voters are excited about the availability of new, developing technologies that allow them to securely vote at home from their own device, just like many other Utahns have seen with the option of voting by mail.”

The November mobile voting is a continued collaboration between the Utah County Elections Division, Voatz, Tusk Philanthropies and the National Cybersecurity Center. Eligible voters will be able to participate in the upcoming election by opting in to vote electronically on their smartphones. Voters will fill out an absentee ballot request, complete their identity authentication and verification on the Voatz application, and submit their ballot for the election. Voting began September 20, 2019 and continues through 8:00 pm on Election Day, November 5, 2019.

“By including the disability community in the expansion of mobile voting in Utah County, we are enabling an entire community to vote anonymously, privately and securely from the comfort of their own home using their own accessible device,” said Forrest Senti, Director of Business and Government Initiatives of the National Cybersecurity Center.”We look forward to collaborating with Utah County and the disability community to conduct the post-election audit to ensure votes cast over the blockchain are recorded accurately.”

Proof of Concept
The pilot will offer blockchain-based mobile voting to active-duty military and their eligible dependents, overseas voters and voters with disabilities registered in Utah County for the municipal general elections in November 2019. This mobile voting option will be offered in addition to the absentee ballot option. The overseas military community currently relies on absentee ballots and is allowed to vote in their home state regardless of where they are deployed (even if deployed domestically). In addition to having the option to cast their ballot via the blockchain-based mobile application, eligible military voters in Utah County can choose to cast their vote through the standard electronic remote absentee ballot system. The electronic remote absentee ballot system currently offered to overseas military voters doesn’t ensure anonymity and relies on email or postal mail for ballot return. Registered voters with disabilities can participate in the November pilot by contacting the elections office and requesting an application to opt-in to the pilot. Utah County complies with all federal law requirements and provides absentee ballots and accessible voting systems at polling places for anyone who self-identifies as being disabled to ensure they are provided the same opportunity for access and participation, including privacy and independence.

Voatz is the technical provider designing the system. With this pilot, they will have launched the third pilot blockchain-based mobile voting solution for a municipal election. They are experienced in the field of voting technology and have run a number of elections for state party caucuses, conventions, union votes and university elections using an app for phones and tablets. Voatz conducted the first blockchain-based mobile voting pilot for a federal election in West Virginia during the 2018 midterms. This pilot conforms with the Uniformed and Overseas Citizens Absentee Voting Act (UOCAVA) and the Military and Overseas Voter Empowerment (MOVE) Act, two federal laws enacted to protect the rights of United States citizens to vote in federal elections while they are serving in the uniformed services or residing overseas.

To Be Eligible to Vote Using This Solution, An Individual Must Be:

1. Deployed and overseas military personnel and their families, other qualified overseas voters (as applicable under the UOCAVA), a voter with a mobility disability and 2. Eligible to vote in Utah County.

Nix says the ultimate goal is to make voting easier for all communities because there are so many who could truly benefit from mobile voting. For example, aside from disability-related challenges, hurdles exist for voters who are hospitalized, away for college, reside in remote locations far from polling sites and so on.