Please ensure Javascript is enabled for purposes of website accessibility Temporary Ramps to the Rescue: Storefronts Made Accessible Thanks to StopGap Foundation - AmeriDisability

Temporary Ramps to the Rescue: Storefronts Made Accessible Thanks to StopGap Foundation 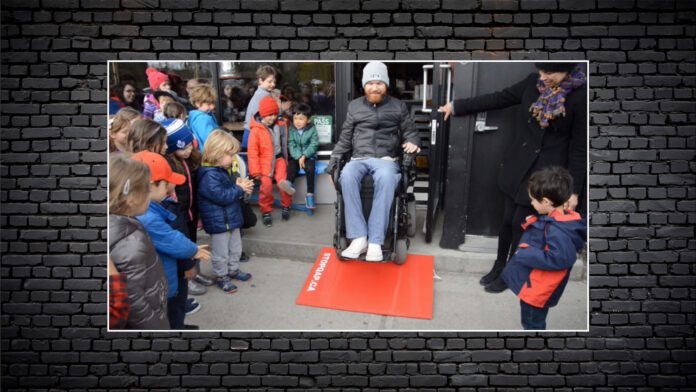 “Did you know that the electric toothbrush was originally designed for someone with limited use of their hands? When we design something for someone with a disability, everyone benefits,” says Luke Anderson, a C5-6 quadriplegic from Toronto. He’s also a civil engineer and the co-founder of the StopGap Foundation, a non-profit bringing accessibility to the world.

When you have an engineering background, your brain tends to work a certain way and this was certainly the case for Luke. Growing up, Luke was athletic, and he fell in love with mountain biking in his teens. “I moved to the interior of British Columbia because it’s known as the best place in the country to mountain bike.”

But in October 2002 at the age of 25, Luke’s world changed. “I was riding with a really good friend of mine on a trail that involved jumping a big 25 foot wide gap. It was on that ride when I tried jumping the gap after watching my friend Johnny successfully doing it. I came up short, flew over the handlebars and landed head first breaking two vertebrae in my upper spine.”

Although the injury was difficult, he went on to graduate from the University of Waterloo. In 2007, he began his career working as an engineer, working for a large firm in Toronto.While working for this firm for several years, there was a temporary ramp situation, which made it impossible for him to get into his job or leave independently. “The ramp worked but it was definitely not ideal because it meant that I needed to rely on someone to help set up the ramp.”

After seeing a viral campaign about bicycle awareness in his city that began by painting bicycles bright colors, he wanted to do the same to wheelchair ramps. “In October 2011, myself and some friends pulled together a bunch of volunteers and some building materials and we built 13 bright red, green, blue, and yellow deployable access ramps for businesses in Toronto’s Junction neighborhood. The goal was to raise awareness about physical barriers that prevent many people from becoming fully engaged in their communities.”

These thirteen ramps have changed the world. Within two years, interest in their initiative exploded and they became a registered Canadian charity. “Our ramps are temporary and are to be used upon request. As such, they do not need to adhere to building codes. Business owners take on the responsibility and any risk associated with using the ramp, they sign a waiver agreeing to use it on a request basis.”

The ramps have a 1:6 rise to run ratio, they have textured, slip resistant paint and they have rope candles. To acquire a StopGap ramp for your business, you can do so through their Ramps on Request program, or by participating in their Community Ramp Project. Ramps cost between $300 – $600 depending on the height of the step.

If you’d like to purchase a ramp, you can contact the StopGap Foundation at buyaramp@stopgap.ca.For more information visit: Stopgap.ca