Wheelchair Athletes Have a Ball 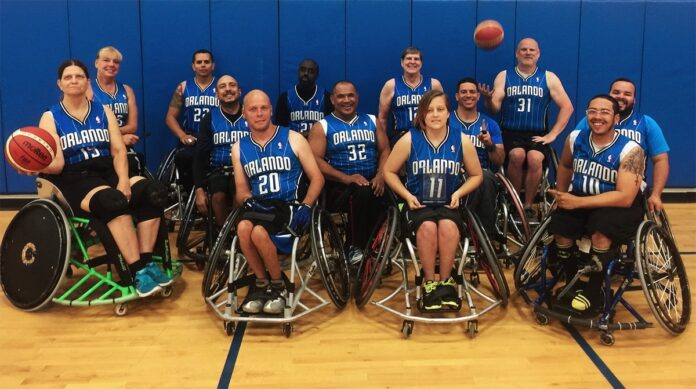 “A lot of us [players] were in competitive sports before we became disabled. When you have that competitive attitude, you can become frustrated if you don’t have that outlet,” explains Prakke. Once the starting center on her high school basketball team, her sports career was sideline when, at 17, osteogenic sarcoma in her pelvis bone led to a pelvectomy. The following year, the same type of cancer claimed three-fourths of her right shoulder. “I did not find out about disabled sports until I was 37 years old and I have not left yet,” says Prakke.“It allows you to enjoy cardio despite a lower limb disability, and offers a culture of people who are not judging you for doing something in a different way.” In fact, the mission of the Orlando Magic Wheels is to educate others about disabilities while helping to sustain and promote physical and emotional health in disabled people.

“We are a division that welcomes and trains novice basketball players. If you’ve never played, we can teach you how,” Prakke affirms. Anyone with a lower limb disability who is coordinated enough to push a wheelchair and hold a basketball is a candidate.The current roster ranges from 18 to 60 years old, with an array of disabilities stemming from, for example, amputation, polio, spinal cord injury and traumatic brain injury. “I had to have a brain operation to correct the av malformations [of blood vessels in the brain],” says Connie Sloat, who joined the team after meeting NWBA Hall of Famer and then Orlando Magic Wheels coach Roger Davis at a disability conference 20 years ago. “This is my other family and we all work together to help each other. I see a person’s heart… not their disability.” Like Sloat, many players are long-standing team members. Prakke wore a player jersey for 17 years before assuming coaching duties this year.“It’s been educational because I am learning more of the intricacies of the game from watching and coaching rather than playing. I am going to take a referee course to further understand all of the fouls and game play,” she declares.

“We are a division that welcomes and trains novice basketball players. If you’ve never played, we can teach you how.” -Joyce Prakke

“The wheelchair is an extension of your own body so, at some point, you should get your own wheelchair made if feasible,” advises Prakke, though she reassures that expensive equipment shouldn’t be a game deterrent. Players can use loaners (thanks to donated chairs from former players), secure wheelchair funding through Challenged Athlete Foundation grants and even find used equipment online at discounted rates.

The Orlando Magic Wheels offers a platform for athletes with disabilities to exercise and practice sportsmanship but also, specifically for newly disabled, presents therapeutic opportunities. “We just signed a memorandum of understanding with the Orlando VA to be a continuous part of their rehab in partnership with the Wounded Warriors,” Prakke shares.

Aside from likeness in name, the Orlando Magic Wheels have no formal affiliation with the NBA’s Orlando Magic team. The organization is funded, in part, by the Harper Family Charitable Foundation but mostly from supportive individual donors. Want to give it a shot? Come out to a practice, held every Tuesday (6-8 pm) at the Silver Star Rec Center in Orlando. The Orlando Magic Wheels averages about 15 games during the regular season (September to April). The top 16 teams in each division qualify for nationals. For more information, visit OrlandoMagicWheels.org; or, for those outside of the Orlando area, visit nwba.org.