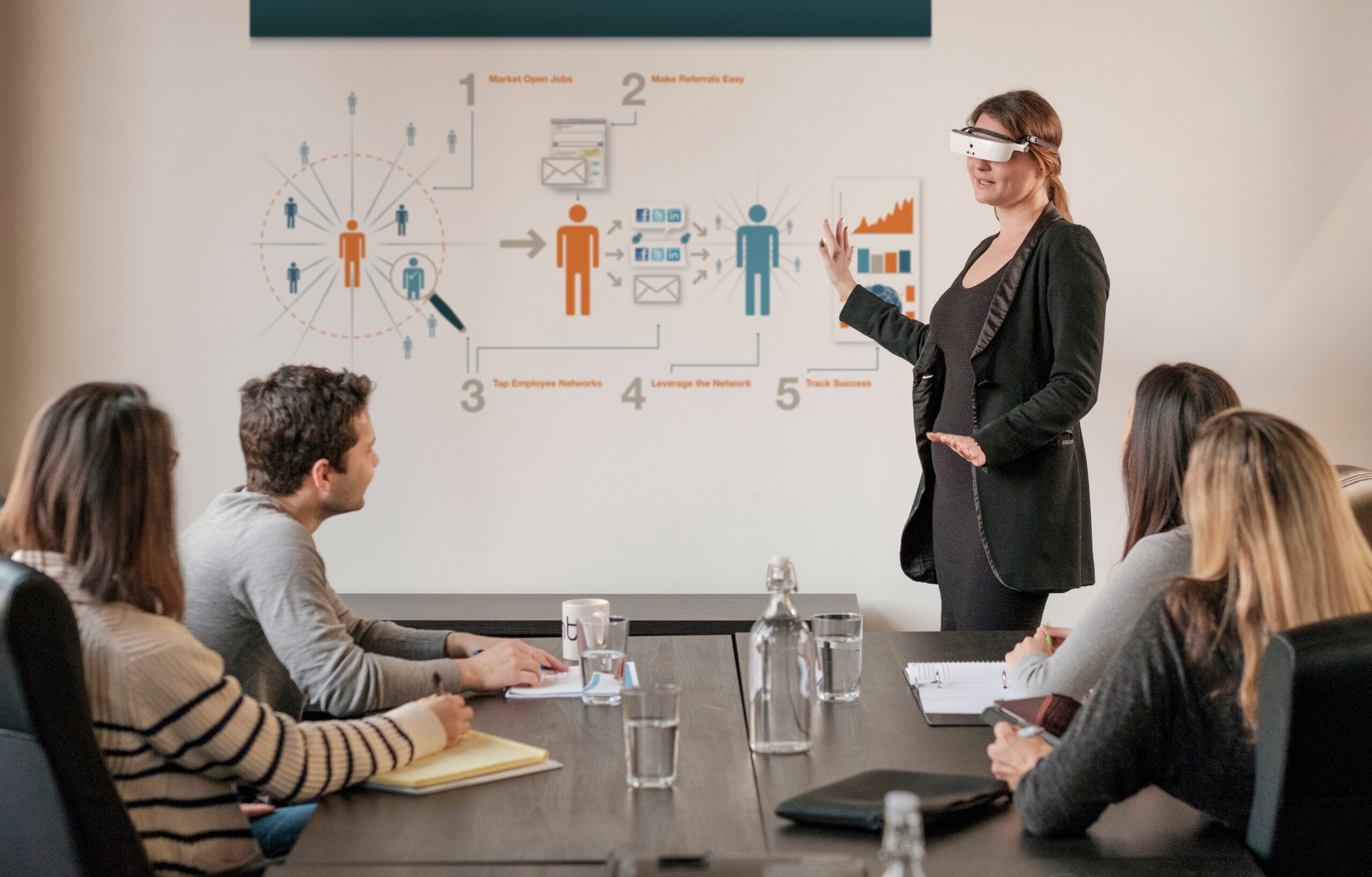 Nearly 4.2 million Americans age 40 and older are visually impaired, according to the American Academy of Ophthalmology, as a result of macular degeneration, diabetic retinopathy, glaucoma, cataracts and other conditions.

“I had been told repeatedly by my retina specialists that there was nothing that could be done for me,” Foster says. So he began advocating for himself and others impacted by vision loss by exploring technology options and assistive devices. While attending a conference with his wife and sister, Foster stumbled upon eSight, electronic eyewear intended to help individuals with legal blindness and/or low vision see clearly. Foster admits he was skeptical. “I just didn’t expect it to work,” he says. To his pleasant surprise, he tried on eSight and saw his wife’s sweet face for the first time in years. It was an emotional, life-changing moment.

The Need for Electronic Eyewear

eSight was invented in 2006 by Conrad Lewis, a Canadian electrical engineer who pledged to restore sight for his two legally blind sisters. In the United States, legally blind means a person sees 20/200 or worse in the better eye or 20 or less degrees of visual field, according to Dr. Cathy Borgeson, an optometrist at Macali Eye Clinic (not affiliated with eSight). “The official definition of low vision is when a person is correctable to 20/70 or worse in the better seeing eye or has a significant visual field defect (large blind spot or loss of the peripheral vision). It means that the person has lost a significant amount of vision that cannot be corrected with conventional glasses, contacts, surgery or medication,” Borgeson says. She adds, “Low vision inhibits the ability to do normal daily activities (cooking, driving, etc.).” People who are legally blind have a greater degree of visual impairment than those with low vision.

Following nearly a decade of research and funding, the first eSight product launched in 2013, followed by the improved eSight 2 in 2015 and the most current generation, eSight 3, in 2017. That same year, Time magazine recognized eSight on its list of “The Best Tech of 2017 So Far.”

How Does eSight Work?

eSight is a lightweight, head-mounted assistive device that looks more like a visor than traditional eyewear. Charles Lim, eSight’s Chief Technology Officer, shared with AmeriDisability why the product is impressing both consumers and medical professionals. “The high-speed, high-definition camera captures everything the wearer is looking at. Advanced algorithms optimize and enhance the footage, then present that footage on two, near-to-eye screens in virtually real time and in stunning clarity,” he describes. “eSight’s remote allows visually impaired wearers to control everything from zoom to contrast, focus, even taking photos and streaming content directly to their eSight,” Lim explains. Plus, eSight’s ability to tilt up and down allows the wearer to always have access to their native peripheral vision and, so, this enables true mobility.

eSight can be worn for as long as needed, either for a specific task or a longer duration. Foster, now 65, typically wears his eSight for a full work day. “I work on a laptop and pretty much wear them all day, with the exception of lunchtime,” he says. In his personal life, he doesn’t wear them as consistently, but always keeps the eyewear nearby just in case.

Because eSight grants Foster 20/20 vision, he was able to resume his beloved hobby of woodworking. His poor vision made the craft unsafe, but now he is able to confidently maneuver his tools again as eSight provides “24 times magnification.” Not to mention that media entertainment has become much more enjoyable. “I can connect to any electronic equipment that has a HDMI port, like my television or iPhone.”

As for that laptop? Well it just so happens to be stationed at the Toronto headquarters of eSight. After Foster bought his first eSight in 2015, he became a passionate volunteer promoting the technology to the visually impaired community. Soon thereafter, he asked for – and landed – a job! “I am the manager of the team that trains clients how to use the eSight. When you buy an eSight, you are assigned a coach and all of those coaches wear an eSight,” he says. It was a leap of faith as Foster had been on disability since he lost his previous employment. Because of his vision loss, Foster lost his license and, consequently, his job where he was expected to drive. “I felt like this was an opportunity to do good and to also be gainfully employed again. That mattered a lot to me,” he says of the decision to relocate from Calgary to Toronto. His wife, Tammy, is equally as passionate about eSight and also works at the company.

The Cost of Vision

Foster says that even though eSight is considered a class one medical device, his health insurance wouldn’t cover it. So, he added the [then] $15,000 cost to his home equity loan. In just a few years since then, however, Foster says, “The price has come down to $5,950, I believe. And the new product is better and lighter!” And the price includes all software upgrades at no additional cost for life.

45-year-old Brian Hunt is legally blind and also tried to get his eSight covered by insurance to no avail. His professional experience working in life insurance in Michigan didn’t give him a leg up on navigating health insurance hurdles. He was told that adaptive equipment for the blind is not medically necessary. It’s an insurance loop hole that Hunt and many others are disappointed by. Hunt has familial exudative vitreoretinopathy (FEVR), a genetic condition where the retinal blood vessels do not develop normally. Unfortunately, he doesn’t expect that health insurance companies will change their policies unless congress forces the issue. That’s why he encourages people with visual impairments to speak out. “Write you congressmen to explain the situation and extreme cost. Most of the time, congress has no clue [about specific health needs] or why it costs so much.” But the high-priced device has proven to be extremely valuable for Hunt. “I use eSight mostly in meetings,” he says, to view screens and presentations.

On a case-by-case basis, some eSight users, according to Foster, have been able to get the product covered after winning appeals with insurance providers. “I think it’s simply just too new,” he says regarding the lag in coverage approvals. Nonetheless, thousands of customers have paid out-of-pocket to be able to watch movies, read books and street signs, excel in the workplace and see the faces of loved ones perfectly clear.

Clarity on Next Steps

eSight 3 works best for those who have at least some remaining functional vision, according to Lim. “Since the device works by maximizing the functional sight that a person has, people who have no functional vision for eSight to enhance are less likely to experience satisfactory outcomes,” he says. Potential users are encouraged to try an “eSight Experience,” before moving forward with a purchase. This is essentially a 30-minute trial session to test the product and ask questions of an eSight expert. To connect with eSight, complete an online form or call 1-855-837-4448.

eSight is sold in 45 countries, but they do have competitors. Other companies have recognized the need for electronic eyewear, such as NuEyes, Aira, AceSight and IrisVision. Still, Foster has his favorite, “eSight is the only electronic eyewear that has been clinically validated.” He hopes that eye care professionals will continue to inform patients of tools that help users regain independence. “I do everything I did before [my vision loss], expect drive a car,” he says. Dr. Borgeson said she would be open to doing just that, proclaiming: “The eSight glasses certainly have potential to help people with visual impairment function better. Since they are a more advanced visual tool, I would refer my visually impaired patients to see a low vision specialist and allow the specialist to recommend devices.”

Disclaimer: This article is not intended as medical device. AmeriDisability does not guarantee the prices listed in this article; please check retailer.

All photos courtesy of eSight.