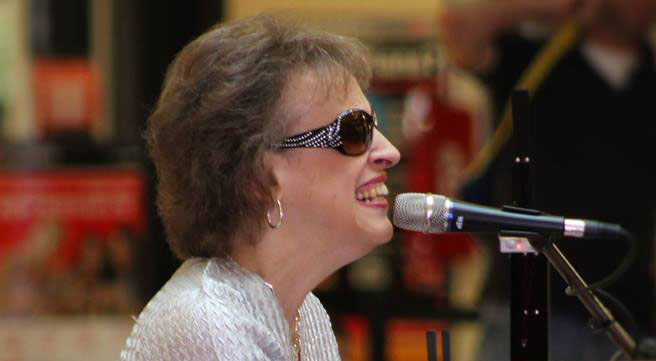 Singer Terri Gibbs says she’s lived a real-life Cinderella story. “One year you’re on the couch [in a mobile home] watching the Country Music Awards and, the next year, you’re on the stage receiving an award,” Gibbs tells AmeriDisability.

Teresa (Terri) Fay Gibbs was born three months premature in 1954. “I was quite small (2 lbs., 11 ounces) and, so, they had to put me in an incubator. At that point in time, they did not know to cover the eyes and my retinas were damaged,” she explains. At six months of age, Gibbs was diagnosed with retrolental fibroplasia and declared blind. Her disability, however, did not hinder her aspirations. She says, “I came from a musical family– several generations – and I wanted to be a country music singer since I was a little girl.”

“My grandmother played piano and, one day at the age of three, my grandmother’s sister sat with me at the piano and played a short melody with my finger. After she walked away, I played it back again on my own,” Gibbs shares. She has what’s known as “perfect pitch,” a rare auditory ability to flawlessly identify and re-create a musical note. With this gift, Gibbs learned to play the piano by ear rather than taking lessons.

In her early twenties, Gibbs was earning a living by singing at local bars in her hometown of Augusta, Georgia. Then, after her demo tape was discovered by music executives, in 1980, she recorded and released “Somebody’s Knockin’.” The single rose on the record charts and earned her the 1981 Academy of Country Music Top Female Vocalist award, the Country Music Association Horizon (now New Artist) Award and a Grammy nomination for Best Country Song. She also toured with country superstars George Jones and Tammy Wynette, and appeared on shows such as Dick Clark’s American Bandstand.

A surprise to many, Gibbs made the decision to shift from country music to Christian contemporary. “The Lord has his own timing for things,” she explains. While she always went to church, Gibbs says she truly received Christ in 1980 after losing her grandmother sharing that, “I wanted to make sure that I was going to see her again.” “At my [country] concerts, I would sing “Amazing Grace” because it was one of my favorite hymns,” says Gibbs. She believes a series of events, including fans telling her that “God wants you to sing for him,” empowered her to switch genres. “I released my first Christian album in 1987 and have done six albums to date,” she says, one of which earned her second Grammy nomination. “I feel like I am doing what God desired me to do. He gave me the talent to sing. It’s very fulfilling,” she says.

Gibbs married city councilman David Daughtry in 1988 and the couple welcomed their son, David. Her family accompanied her on tours for a while until Gibbs decided to make motherhood her primary job. “David had just started kindergarten and was enjoying school. I asked him one day, ‘What is the favorite part of your day?’ I thought he would say recess or something like that but he said, ‘When I come home in the afternoon and you are there.’ I knew that was God’s way of telling me that’s where I was supposed to be [rather than on the road],” Gibbs recalls. Today, she’s overjoyed that David shares her love of music. “If someone would have told me when I was in my twenties that one day I would have a son who loves music as much as I do and be singing with me on stage, I would have never believed it,” she admits. Yet mother and son are now music collaborators!

Like many “seniors,” Gibbs once resisted technology but admits that opting for a smartphone a few years ago increased her access to music. Plus, fans who use social media can learn of upcoming appearances via her Facebook page. And, while she describes herself as an avid reader (since learning braille at age five), she’s also discovered a love for books on tape.

Gibbs famously proclaimed, “I’m not a blind singer. I’m a singer who happens to be blind.” That mentality ─ to not let her disability define her ─ has been key to her happiness and success. “It took me a long time to see that [the] disability is not who I am. God created me to be whole…I am whole and that’s how He sees me,” Gibbs says, and she hopes others with disabilities share this mindset.

In 2012, the Artists Music Guild honored Gibbs with a Lifetime Achievement Award. So, what’s next? Gibbs says, “I am just going to continue to sing as long as God allows me. It’s who I am and what I do!