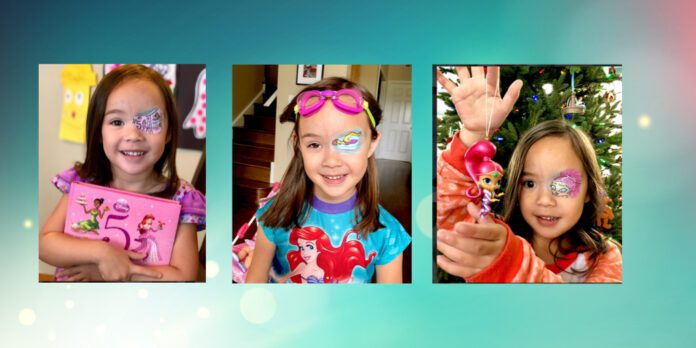 Four-and-a-half year old Layla loves Ariel from Disney’s The Little Mermaid. Unlike her preschool classmates, she doesn’t just showcase her affection for the cartoon mermaid (and other beloved characters) through clothing; she also wears a customized character-clad eye patch hand-drawn every day by her dad, Geof Grubb of Gurnee, Illinois.

Layla was born with a cataract in her right eye. The U.S. National Library of Medicine defines a congenital cataract as clouding of the lens of the eye (that’s present at birth). The lens is normally clear and focuses light that comes into the eye onto the retina. While cataracts are fairly common among the aging demographic, incidence is rare among children (affecting approximately 3-out-of-10,000) and it can hinder a child’s vision development.

When she was about nine months old, Layla began wearing a patch over her left eye to encourage vision-strengthen of her right eye. “On the first day, we put the Band-Aid like patch on her and it was just kind of sad and boring looking. So, the next day, I decided to draw something on the patch. At the time, it was more so for me because she was too young to know,” admits Geof, who initially drew inspiration from his own interests, like comic books, superheroes and video games.

The father of two has maintained the task of creating a unique patch everyday which, on average, takes about 30 minutes. “We’ve done about 1,200 different patches,” he says. In the beginning, to keep things interesting, Geof never repeated a design but, now years later, he typically sketches different variations of Layla’s favorite things per her request. “It started off making it more fun for me, and now it’s made it a lot more fun for her since she’s now in on it,”he says. Aside from Ariel, Layla also likes other Disney princesses, Bat Girl, flowers, animals and many other playful and whimsical kid stuff. Surprisingly, Geof doesn’t have an artistic background; he’s a chemical engineer turned supercreative stay-at-home-dad. And Layla isn’t his only fan! Geof has nearly 12,000 followers of Instagram (Layla’sPatches). But he says patch design is not a new career calling; rather, just a creative outlet and bonding opportunity to share with his daughter.

While some small pediatric cataracts can be medically-treated by eye drops, eyeglasses and patching therapy, doctors weren’t satisfied with Layla’s vision progression and, in February 2018, surgically removed her cataract. Still, Layla must wear an eye patch for about three hours per day, perhaps until she is 8 to 10 years old (when vision development is complete). She typically wears the patch at home, rather than at school, because Geof says that allows him more control ─ after all, she’s a young kid and, at times, just doesn’t want to wear the eye patch. However, he also alludes to gazes and inquiries from others. Geof says people rarely question why Layla wears an eye patch but, overall, it’s always nice when someone offers praise for her cool eye patch instead of just a stare. He suggests, “If you see someone with an eye patch, maybe say something really nice to them. It helps to compliment the child!” Because, after all, kindness helps and heals us all.