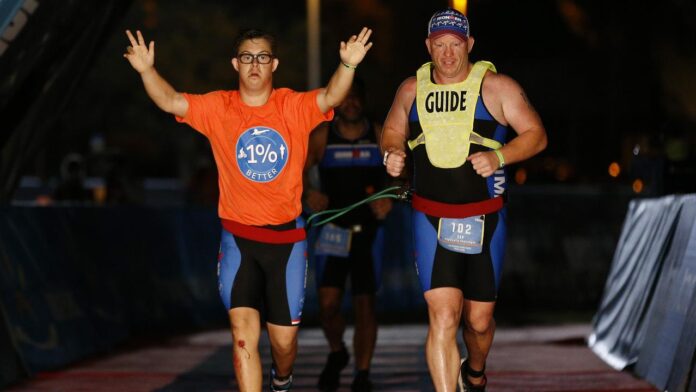 Adaptive athlete Chris Nikic has made a historic feat once again! On October 6, 2022, the 23-year-old sportsman became the first person with Down syndrome to compete and finish the Ironman World Championships in Kona, Hawaii. In case you’re not familiar with this three-part distance race, it’s a whopping 2.4-mile swim, 112-mile bike ride and 26.2-mile (full marathon) run, totaling 140.6 miles. Nikic, alongside his volunteer guide Dan Grieb, finished the long course in 16 hours, 31 minutes and 27 seconds.

In 2020, Nikic became the first person with Down syndrome to finish a full-distance Ironman Triathlon when he competed in his home state of Florida. That earned him a Guinness World Record and, soon after, the Jimmy V Award for Perseverance as part of the 2021 ESPY Awards. Nikic was also invited to participate in the 45th Ironman World Championship in Hawaii, which is considered to be among the most grueling races thanks to extreme temperatures and high humidity.

To prepare for the physical and mental challenge, Nikic dedicated himself to an intense training regime. And, as a result, Nikic yet again proved that people with intellectual developmental disabilities can rise to the occasion – and even set records – when given the same opportunities as those without disabilities.

People with Down syndrome have an extra chromosome which, according to the National Down Syndrome Society, can cause intellectual developmental disabilities, as well as low muscle tone, small stature, an upward slant to the eyes and other differing characteristics. But, as Nikic has demonstrated, these differing characteristics do not define a person.

Somehow amidst his busy training schedule, Nikic has managed to achieve great professional success. Nikic co-authored, with his father Nik Nikic, the book “1% Better: Reaching My Full Potential and How You Can Too.” It centers on Nikic’s mission to inspire others to achieve their goals by getting just 1 percent better every day. Nikic regularly shares his “1% Better” philosophy as a motivational keynote speaker.

Additionally, through The 1% Better Chris Nikic Foundation, Nikic strives to make physical fitness accessible and achievable for all people with intellectual developmental disabilities. Operating as a project of Players Philanthropy Fund, a Maryland charitable trust, Nikic’s foundation is on a mission to incorporate physical fitness for people with intellectual developmental disabilities as “standardized practice in society, schools, and health and wellness facilities.”

In case making sports history again wasn’t enough, Nikic completed the Ironman World Championships on his 23rd birthday, which occurred during National Down Syndrome Awareness Month (October). And, according to the Special Olympics, one of Nikic’s partnering organizations, Nikic also got engaged to his love, Adrienne, at the finish line!

Are you inspired by Chris Nikic? Will you commit to striving to be “1% Better” every day?

Share
Facebook
Twitter
WhatsApp
Email
Previous articleNearly All 50+ Voters with Disabilities Plan to Vote in Midterm Election
Next article13 Adaptive Halloween Costumes Still Available on Amazon
Nancy DeVaulthttps://www.ameridisability.com
Nancy is the managing editor of AmeriDisability. She is an award-winning storyteller passionate about health and happiness.